Every week the Town Crier blog will look back at Seattle’s near-forgotten Town Crier magazine to see what was happening then and talk about what’s happening now. One of the largest sections of the original Town Crier was “What People Are Doing,” highlighting things like, “The Junior Prom takes place tonight at the Masonic Temple” and, “The Smith College Club of Seattle is giving a series of dances at the Women’s University Club to aid in raising the $4,000,000 endowment fund for their alma mater.” In this series we’re revisiting the old column and tying it to our community’s current happenings, asking: “what are people doing?” 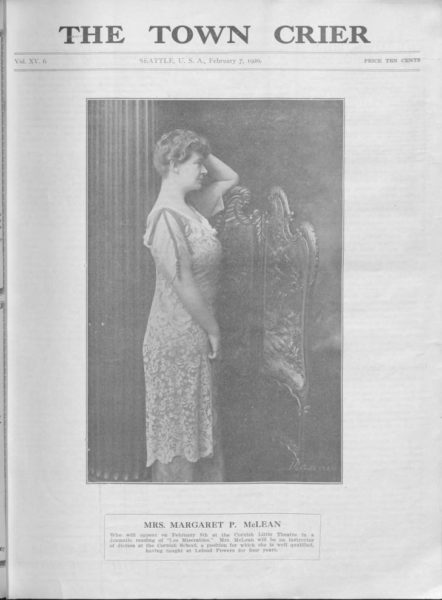 Gracing the cover of the February 7, 1920 Town Crier was none other than Mrs. Margaret P. McLean. McLean taught at Cornish College and was to give a dramatic reading of Victor Hugo’s Les Miserables to rapt and adoring fans.

Town Hall fans, there are a variety of events involving drama this very month on our stages:

February 12: Diane Rehm: When My Time Comes. Arguably the most dramatic event in one’s life is at the end of it. Rehm talks with KUOW’s Ross Reynolds about the Right-to-Die movement.

February 15: Julie Blacklow: Diary of a Badass Reporter. Blacklow was among the first generation of women in television news in the United States.

February 19: Pacific Flyway: Waterbird Migration from the Arctic to Tierra del Fuego. The incredible stories of migratory birds and their challenges for survival.

February 25: Susan Fowler: Fighting Sexual Harassment in Silicon Valley. A chronicle of her stand against the pervasive culture of sexism, harassment, racism, and abuse at Uber.

For our full calendar of Town Hall events visit us here. Most tickets are only $5 (and FREE to anyone under the age of 22). We look forward to having you join us.