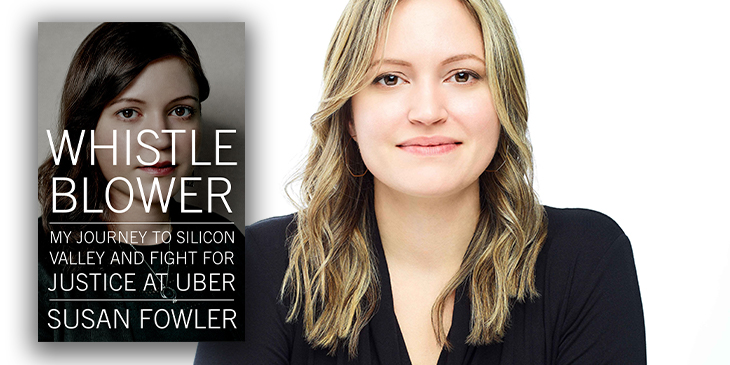 In 2017, twenty-five-year-old Susan Fowler came forward to discuss the sexual harassment and retaliation she’d experienced as an entry-level engineer at Uber. Her story went viral, leading to the ousting of Uber’s CEO and contributing to a wave of vigilance against sexual harassment that has been cited as a critical factor in the movements against figures such as Harvey Weinsten.

Fowler makes her way to Town Hall with excerpts from her memoir Whistleblower: My Journey To Silicon Valley And Fight For Justice At Uber, chronicling her stand against the pervasive culture of sexism, harassment, racism, and abuse at Uber. In conversation with KUOW’s Carolyn Adolph, Fowler reveals how, when was told that she was the problem, she banded together with other women to try to make change. When that didn’t work, she went public. She could never have anticipated what would follow: that she would be investigated, followed, and harassed; that her words would change much more than Uber; or that they would set her on a course toward finally achieving her dreams. Join Fowler and Adolph as they explore Fowler’s unbelievable true story of her experiences facing down one of the most valuable startups in Silicon Valley history—and the fallout that arose from her stand against inequality.

Susan Fowler is an editor at the New York Times who edits the “Op-Eds from the Future” series. Previously she worked at Stripe as the founding editor in chief of Increment, and was one of the “Silence Breakers” named Person of the Year by TIME.

Carolyn Adolph is a reporter for KUOW who covers Seattle’s growth by looking at the city’s major companies. She’s also a co-host of KUOW’s Prime(d) podcast.