Every week the Town Crier blog will look back at Seattle’s near-forgotten Town Crier magazine to see what was happening then and talk about what’s happening now. One of the largest sections of the original Town Crier was “What People Are Doing,” highlighting things like, “In the Northwest the game of golf seems to have wrought havoc with tennis,” and, “Mrs. Thomas Bordeaux entertained with a dinner of sixteen covers on Saturday evening.” In this series we’re revisiting the old column and tying it to our community’s current happenings, asking: “what are people doing?” 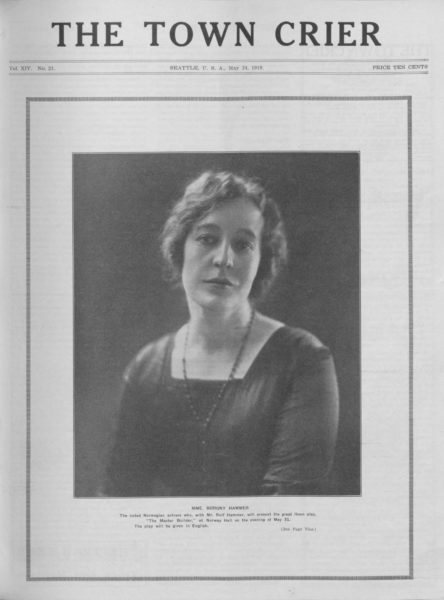 On the cover of the May 24, 1919 edition of the Town Crier was Mme. Borgny Hammer. Mme. Hammer and her husband Rolf were coming to Seattle to perform at Norway Hall. They were going to perform Henrik Ibsen’s play, The Master Builder. Adele Ballard, a Town Crier regular, with her column “Various and Sundry,” said of the acclaimed actress, “I saw her the other day for a few minutes. She came into the office and it was a warm and rather enervating day, but in about one minute, or less, she re-vitalized the whole atmosphere with her vivid personality: she is like the breezes blown from the sea across the snow-capped mountains, or like the wild flowers of her own land, the hardy ones that force their way up through the rocks into the sunlight of Norway.” High praise, indeed!

Forcing its way today through the bustling busy blocks of Ballard has come the newly redesigned National Nordic Museum. The gleaming edifice opened in May of 2018. It is an internationally recognized museum and cultural center dedicated to collecting, preserving, and educating since its founding in 1980. The National Nordic Museum is the largest museum in the United States to honor the legacy of immigrants from the five Nordic countries: Denmark, Finland, Iceland, Norway, and Sweden. Current exhibitions include “Studio 54 & Beyond: The Photography of Hasse Persson” and “Bamse: The World’s Strongest Bear.”

Also, Town Hall’s Capital Campaign Manager, Grant P.H. Barber, is doing a class there on June 8. You can learn how to brew a batch of Finnish Sahti in the traditional method of USING A HOLLOW LOG.

We wonder if the Nordic Museum has anything about Mme. Hammer in their permanent collections? We at the Town Crier will investigate. Stay tuned.