Henry, Sandy, and a Commissioned Painting 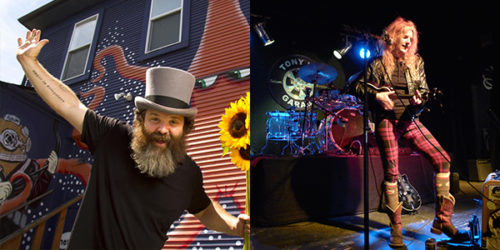 What do happy squirrels, paper bag sing-alongs, and wall-to-wall murals have in common? They’re coming together for the final performance in this season’s Saturday Family Concert series. Town Hall presents Sandy Buchner, local musician and co-founder of Happy Squirrel Arts, alongside Seattle’s prolific muralist Henry for a fun whizbang show at Town Hall’s Forum on June 1. Tickets are FREE for kids and only $5 for adults. They’re on sale now. Come early (doors open at 10) for arts and crafts!

He came into the offices after he finished the painting. We were like giddy schoolkids when he entered the office, approaching with the canvas. “You guys want some stickers, too?” YES, WE WANT STICKERS! He pulled out a wad from his front shirt pocket and passed them around. He then showed us the canvas and we smiled hard. 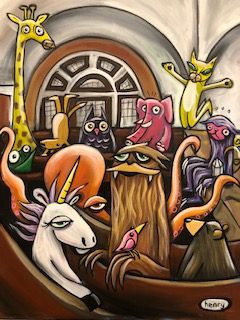 Town Hall’s staff loves the painting with all those kooky characters in Town Hall’s newly renovated Great Hall. We’ve chosen what animal is each coworker (to note: I am the giraffe). Wier Harman, Town Hall’s Executive Director said, “I’m feeling the octopus.” We’re feeling giddy now that we have a Henry to display in Town Hall for years to come and we’re feeling giddy about seeing Henry and Sandy for the coming Saturday Family Concert.