The Titans of ‘Canto General’

“Look at me from the depths of the earth,
Tiller of fields, weaver, reticent shepherd,
Groom of totemic guanacos,
Mason high on your treacherous scaffolding,
Iceman of Andean tears,
Jeweler with crushed fingers,
Farmer anxious among his seedlings,
Potter wasted among his clays –
Bring to the cup of this new life
Your ancient buried sorrows.”

What writer could possibly write a poetic history of the entire American Western Hemisphere from a Hispanic perspective? The Nobel Prize-winning Chilean writer Pablo Neruda. Who could possibly put Neruda’s poems appropriately to music? The Lenin Prize-winning Greek composer Mikis Theodorakis. The titanic piece is going to be showcased at Town Hall’s Great Hall on June 8 by the Seattle Peace Chorus. It will feature soloists alto Nadia Tarnawsky, a Fulbright recipient, and baritone Jonathan Silvia, who will be featured soon in Seattle Opera’s production of Rigoletto. Tickets to “Pablo Neruda’s Canto General: A Concert” are on sale now.

Pablo Neruda (1904-1973) was first and foremost a poet. As a teenager he started getting his work published. He published a great many love poems thick with passion throughout his life. His most known collection is Twenty Love Poems and a Song of Despair (1924). Some of these love poems were featured prominently in the Italian movie Il Postino, a film that was nominated for Best Picture in 1995.

More than a poet, Neruda was a diplomat and politician. He was a senator for the Chilean Communist Party. When communism was outlawed in Chile in 1948, a warrant went out for his arrest. He hid underground for a time before he was able to escape to Argentina. Years later, he became a close and trusted advisor to Salvador Allende, Chile’s socialist president from 1970 to 1973. Allende asked Neruda to read his poetry in a Chilean stadium. 70,000 came for it. Allende was soon overthrown in a coup d’etat, orchestrated by Augusto Pinochet. Again, Neruda’s life was in danger. If fact, with Pinochet’s rise, Neruda died. He was poisoned. His remains were recently unearthed to prove it. Gabriel Garcia Marquez has called Neruda, “the greatest poet of the 20th century in any language.”

“My land without name, without America,
Equinoctial stamen, purple lance,
Your aroma climbed my roots up to the glass
Raised to my lips, up the slenderest
Word as yet unborn in my mouth.”

Canto General was Neruda’s tenth book of poems. Published in 1950, it consisted of 15 sections, with a total of 241 poems. For it, he won the the Nobel Prize for Literature. Each section was a “canto.” The first canto: A Lamp on Earth. The second: The Heights of Macchu Picchu. The ninth: Let the Woodcutter Awaken. The fifteenth: I Am. Each section is rich with the trials and tribulations of emperors and explorers, dictators and freedom fighters. Considered Neruda’s masterwork, it mixes his communist sympathies with national pride, depicting Latin America’s history as a constant struggle against oppression.

When Neruda was still in Chile he met a Greek exile, Nikis Theodorakis (1925- ), arguably Greece’s most famous composer. He has written over 1,000 songs and has scored the movies Zorba the Greek and Serpico. His Mauthausen Trilogy is considered one of the greatest musical works about the Holocaust.

He, like Neruda was, is an artist-politician. With ties to the Communist Party of Greece, he’s been elected to parliament and became a government minister under Constantine Mitsotakis (Greece’s Prime Minister from 1990-1993). Theodorakis continues, now in his 90s, to be a voice against oppressive regimes.

Neruda and Theodorakis met and discussed Canto General. Perhaps it could be set to music. The two picked the poems that were to be included in the piece. Theodorakis finished four movements in 1973, the year of Neruda’s death. He continued to work on the piece, expanding it in 1975 and again in 1981. The complete oratorio (now with 13 movements) was recorded live for the first time in Munich in 1981. 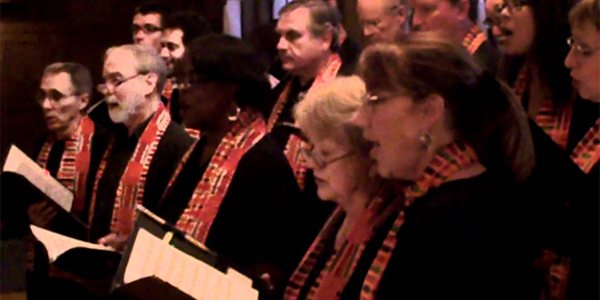 Hear these greats of their respective disciplines on the 80th anniversary of the publication of Neruda’s Canto General. Seattle Peace Chorus presents it in its glory on June 8 at Town Hall.