Singing to the Choir

On June 15, at Town Hall’s Great Hall, Seattle Girls Choir will present their biannual “All Choir Concert.” It features all six levels of Seattle Girls Choir from kindergarten through high school. About 180 young singers altogether, the event showcases their hard work and dedication.

Tickets are on sale now.

JS: How did you get involved with Seattle Girls Choir?

JW: In 2009, SGC’s founder decided to retire after 27 years with the organization. I had a piano student who was a member of SGC, and she told me about the job opening and urged me to apply. I did, and ultimately was offered the position of Artistic Director and conductor of Prime Voci, the most senior group.

JS: What are you most proud of in your tenure there?

JW: I can point to individual achievements and moments. Certain concerts stick out in my mind, such as our first “Carmina Angelorum” holiday concert back in 2012. Last summer we competed in a big international choral festival, the Llangollen Eisteddfod in Wales, and we turned in some of the best performances we’ve ever done, which was extremely gratifying. Overall though, I think I’m most proud of the bigger picture: that every level of the organization has seen tangible musical growth over the past several years.

JS: What are you most looking forward to going forward as SGC’s Artistic Director?

JW: We’ve had a few years with a little bit of instability in our faculty, with really wonderful musicians who were getting pulled in many different directions. I’m extremely happy with the faculty we have in place now, and I’m looking forward to seeing the growth in the younger groups, and how that will trickle up to my own choir in 7-8 years!

JS: As a kid, when did you get introduced to music? What did your parents listen to? When did you start singing? When did you think you could make a career in music?

JW: My parents listened to a mix of classical music and folk. There was a lot of Simon & Garfunkel and Ian & Sylvia. I started off taking piano lessons probably about age six and joined the Northwest Boychoir when I was seven. I played and sang throughout high school, adding string bass into the mix mostly so I could hang out with the kids in my school orchestra, who were some of my best friends. I’m not sure when I started actively thinking about a career in music, but I remember coming to the realization in college that it really wasn’t going to be possible to pursue degrees in both music and biology (too many direct conflicts), and asking myself  “which one can I not do without?”

JS: Who are some of your favorite composers?

JW: I’m awfully fond of Beethoven. Film music was also an early love of mine, so John Williams too!

JS: What are some of your favorite choral pieces?

JW: Every year we sing Benjamin Britten’s “A Ceremony of Carols” during the holiday season. I keep waiting to get tired of it, but it hasn’t happened yet!

JS: What are the steps involved if a child wanted to join SGC?

JW: Step one is always going to be getting in touch with our office. What happens next depends a little on age: In kindergarten or first grade they would probably be placed in out Piccolini group. All other groups require a short and, hopefully, non-threatening audition where the child is asked to sing a song and play some ear games to demonstrate their ability to match pitches. Older girls may also be asked to demonstrate any prior knowledge like identifying notes on a staff or rhythmic values.

JS: If you could sing a duet with someone famous, who would it be?

JW: What a great question! I’m going to go with Paul McCartney. There were some great duets between Paul and John Lennon in the Beatles’ early material, and it would be really great doing things like “If I Fell” or “I’ll Follow the Sun” with Sir Paul! 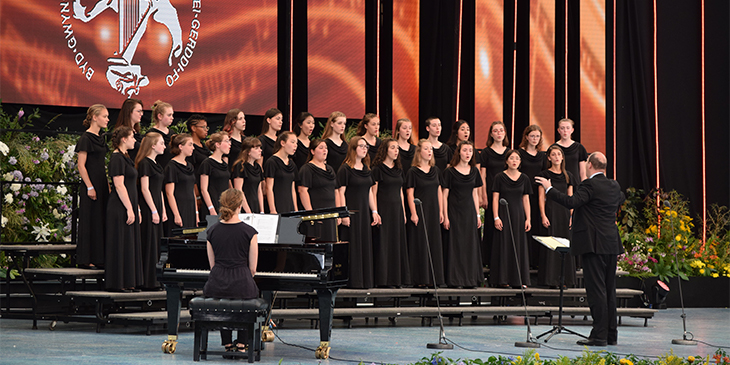 Join Jacob Winkler and fall for the wondrous sounds of the Seattle Girls Choir on June 15. Get your tickets here.