Every week the Town Crier blog will look back at Seattle’s near-forgotten Town Crier magazine to see what was happening then and talk about what’s happening now. One of the largest sections of the original Town Crier was “What People Are Doing,” highlighting things like, “Now that the holidays are over there is an aftermath of deadly quiet in social circles” and, “In celebration of the wedding day of George and Martha Washington, the Rainier Chapter of the Daughters of the American Revolution is giving an elaborate card party at the Scottish Rite Temple.” In this series we’re revisiting the old column and tying it to our community’s current happenings, asking: “what are people doing?” 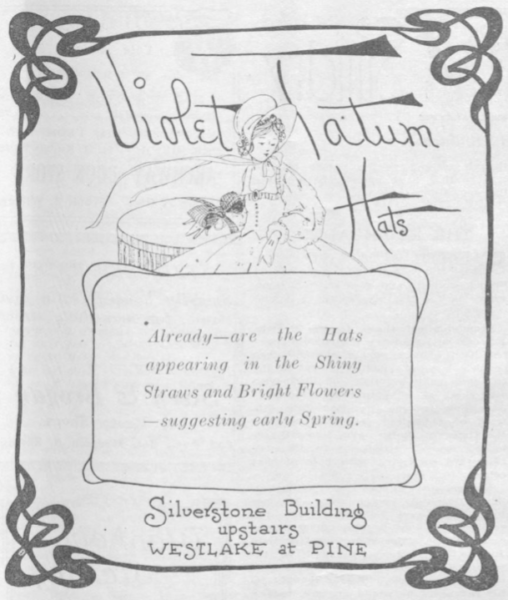 There was an ad in the January 17, 1920 Town Crier for Violet Tatum Hats. “Already-are hats appearing in the shiny straws and bright flowers- suggesting early Spring.” Hats were a big thing in the 1920s. And Spring is a big thing at Town Hall.

True, Spring 2020 doesn’t begin in the Northern Hemisphere until Thursday, March 19 but Town Hall’s got an early spring with a plethora of events. For instance:

January 17: Mozart Birthday Toast. Raise your glass to celebreate Mozart’s birthday with an evening of intimate masterpieces by one of the most beloved composers of all time. The concert will be performed by Byron Schenkman and friends.

January 31: Lyric World. How can poetry expand our understanding of civic life? Poet and former Town Hall Artist-In-Residence Shin Yu Pai invites us to the first of her Lyric World discussions, exploring the role of poetry as it stokes our curiosity and gives voice and attention to the human experience..

February 22: Showtunes Theatre Company’s 20th Anniversary Gala. It will be a night filled with laughter, music, memories, and surprises.

February 23: North Corner Chamber Orchestra. “Through the Glass,” the third concert cycle in NOCCO’s 2019-20 season, shines a light on important though often forgotten elements of our musical fabric: women composers and young performers.

February 29: Miguel Zenon Quartet. Earshot Jazz brings one of the most groundbreaking and influential saxophonists of his generation.

Come on out to Town Hall before Spring. Wearing shiny straws and bright flowers is entirely optional! We’re looking to seeing you.