What We Don’t Know About Domestic Violence Can Kill Us

Acclaimed journalist Rachel Louise Snyder takes the Town Hall stage on May 21 to deliver a reckoning with the urgent and widespread problem of domestic violence with insight from her powerful new book No Visible Bruises (glowingly reviewed recently in the New York Times). She’s joined onstage by KUOW’s Sydney Brownstone, and together these two journalists reveal the scale of domestic violence in our country.

Katie Kurtz is a Seattle based freelance writer, currently working on a true crime memoir about three of her classmates whose murder remains unsolved 30 years later. She previews Snyder’s event here:

Why didn’t she leave? This question pointed toward victims illustrates why the culture surrounding domestic violence thrives: The onus is on the woman to escape, not on the abuser who makes her feel like she needs to run for her life.

With the National Domestic Violence Hotline reporting that nearly 1 in 3 women (35%) in the US have experienced rape, physical violence, and/or stalking by an intimate partner in their lifetime, everyone is touched by domestic violence. The numbers may never be fully known, though. Whether the victim is still in the relationship or has managed to leave, the fear instilled by the abuser effectively silences her forever.

In No Visible Bruises: What We Don’t Know About Domestic Violence Can Kill Us, Rachel Louise Snyder unpacks the systemic reinforcement of domestic violence and the various inflection points where intervention is possible. The book opens with a case study of Michelle Monson of Montana and traces hers and her children’s eventual deaths at the hands of Michelle’s husband Rocky. Snyder’s investigation includes interviews with all surviving relatives, including Rocky’s who completed suicide immediately after killing his wife and their children. One among 1,200 possible cases (that’s how many women in the US are killed annually by a partner), Michelle Monson’s story shows how it isn’t one single factor that could have pointed toward a violent end to her life but a gradual accumulation of events.

Awareness is growing that abusiveness does not start out as physical and, as Snyder notes, 20% of these relationships don’t entail physical violence at all. Abusers use various tactics to maintain power over the victim through emotional, psychological, financial, and sexual control. These forms of coercive control can look a lot like the Hollywood version of a budding romance. Stopping by unannounced with a bouquet of flowers may look dreamy in the movies but it can also be an excuse for the suitor to confirm she is where she says she is. France and the UK have laws against coercive control; the United States does not.

Snyder’s book covers the persistent question about whether angry and controlling men can be rehabilitated. Men recognizing their own violent behavior is fundamental to dismantling the structures that support it. But the difficulty in how we get there can be illustrated by this conundrum: Joe Biden was the senator who introduced the Violence Against Women Act in Congress in 1990, shortly before his campaign to discredit Anita Hill. Now we know that gaslighting—named for the 1944 movie Gaslight starring Ingrid Bergman who was slowly being driven insane by her husband—is a form of psychological abuse.

Many of us were glued to Christine Blasey Ford’s testimony about the Supreme Court nominee who—despite our collective fervent invocations that maybe just this once the sexual predator doesn’t win—was approved. Her quote, “Indelible in the hippocampus is the laughter,” speaks to the long-term effects trauma has on survivors. Indelible.

There will likely be a number of survivors in the audience for this event. We need our community there with us, too. If you or someone you know is experiencing intimate partner violence, call the National Domestic Violence Hotline at 1-800-799-7233 or visit The Hotline website. 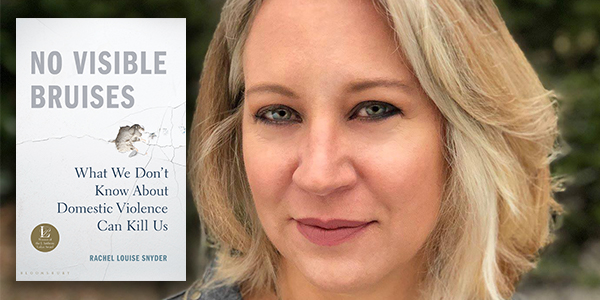 Tickets are on sale now for this powerful event, happening on May 21 in Town Hall’s Forum.