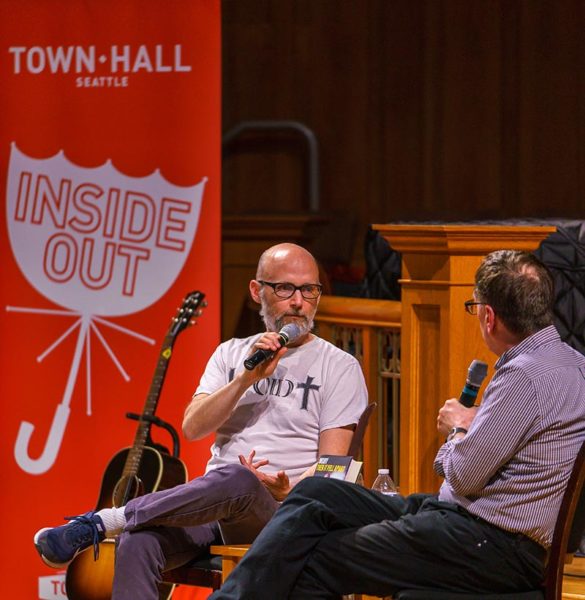 “I’m not complaining,” Moby says. Even after everything he’s been through, Moby isn’t complaining. Even after the panic attacks, drinking, sleeplessness, meth, suicide attempts, fame, sobriety, emptiness, Moby is still not complaining. He’s giddy recounting the time that he and David Bowie played Bowie’s song “Heroes” together in Moby’s living room, as giddy as I imagine he was the first time he got to tell the story. He is irreverent, playful, and self-conscious.

Town Hall proper is nearly complete with its renovation [the Great Hall is opening soon], so the event is held in Seattle First Baptist Church, which does not go unnoticed by Moby. The very first thing he says when he walks onstage is, “Is this a piano?” and the second thing is, “I feel bad that I’m wearing this shirt inside a church.” His shirt has an upside down cross and the word “VOID” across it. Then he swears, wonders if it is okay to swear in a church, decides that God would be okay with words describing fecal matter, and concludes that God invented s*** and if we couldn’t s*** then we would all die. He doesn’t miss a beat and answers Ross Reynolds‘ question about touring. Moby speaks in great loops, explaining himself or defending strong opinions. Moby’s unique mixture of sincerity, insecurity, and hope for a reaction make him a great entertainer.

We all know someone like Moby. Someone whip-smart who had a rough start to life, who struggled with addiction, who made mistakes. His talk is a celebration of what happens when you hit rock bottom and live through it. His story is heartbreakingly familiar. When Moby was 33 (Jesus’ age at resurrection, as I’m sure Moby would be quick to point out) he made it big with the album Play. For Moby, it was as if someone swapped out his tough hand with a great hand. “It’s like the world decided to play a cruel joke and give me everything I ever wanted to see how I dealt with it,” Moby says, adding, “but I’m not complaining.”

Ross Reynolds moves the event into Q&A. Moby answers questions and he strikes me as someone who would happily stay up all night talking philosophy. He also strikes me as someone who would do anything to get a laugh—at Town Hall, that thing is a mimed re-enactment of the time he brushed his flaccid penis up against then-civilian Donald Trump. As Seattle consumes more and more housing, so Seattleites consume podcasts. If you don’t listen to podcasts, I recommend them for when you’re doing the dishes or on a long drive. Heavyweight is a beautifully strange Jonathan Goldstein project in which he finds the answers to people’s decades-old personal questions. In one episode, Jonathan and his friend Gregor try to get back some CDs that Gregor lent Moby in the 90s, which Moby went on to sample to make his breakout album Play. Predictably, someone asked about this podcast episode. Moby says, “I think they cut it from the episode, but the truth is that I have no idea where the CDs are.”

Moby plays three songs. The first is a request from one of the youngest audience members, a child named Alexander, who asks for “We Are All Made of Stars”. The final song is the song that the book title Then It All Fell Apart comes from: “Extreme Ways“.

After the music, Moby says he’s eager to get to the book signing. And no one is complaining. 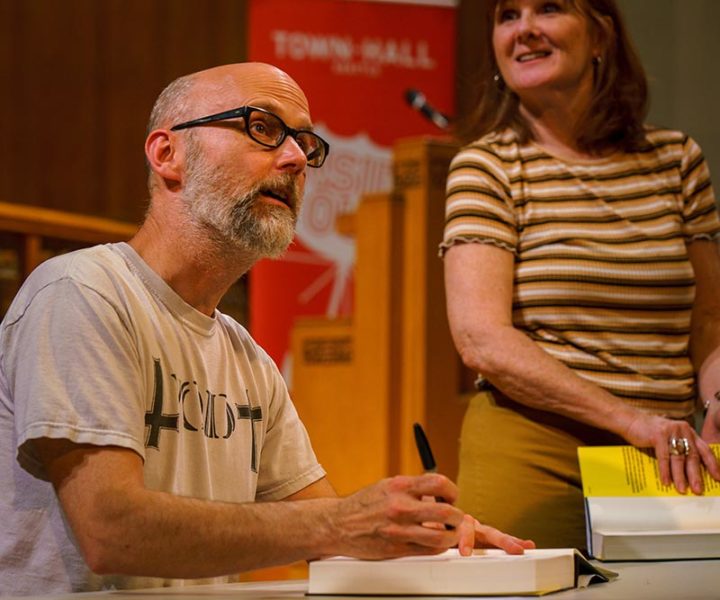