Every week the Town Crier blog will look back at Seattle’s near forgotten Town Crier magazine to see what was happening then and talk about what’s happening now. One of the largest sections of the original Town Crier was “What People Are Doing,” highlighting things like, “Mrs. George Noble Skinner has been confined to her room at the Terry Hotel with a severe case of neuritis,” and, “Mrs. Prescott Oakes has returned from Santa Barbara, where she spent a few weeks.” In this new series we’re revisiting the old column and tying it to our community’s current happenings, asking: “what are people doing?” 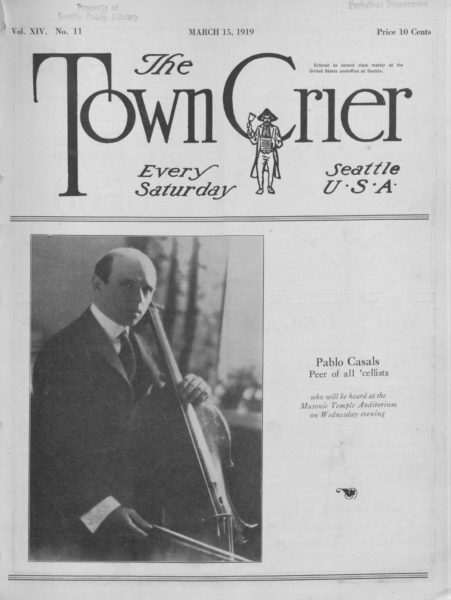 On the cover of the March 15, 1919 edition of the Town Crier was one of the most famous musicians alive at that time, cellist Pablo Casals. He played at the Masonic Temple, at Harvard and Pine, on March 19. Prices ran from 83 cents to $2.20 (including war tax). The Crier waxed poetic about Casal’s coming concert inside the publication. “When master musicians like Fritz Kreisler says that Casals is the greatest musician that has ever drawn a bow and Eugene Ysaye adds that he is the greatest interpretive artist he has ever heard, than we know that we are not listening to any ‘fairy stories’ that may or may not come true.” The praise kept on coming. “He plays so tenderly he melts the heart of you; plays like an angel, either damned or celestial. There is something diabolic in his energy of attack, an attack like the slash of a sabre. What temperament! What surety! What purity of intonation!”

Pablo Casals (1876-1973) was a cellist, composer, and conductor from Catalonia, Spain. Regarded as one of the greatest cellists who ever lived, he is perhaps best known for his recordings of Bach’s Cello Suites. He was awarded the Presidential Medal of Freedom in 1963.

Town Hall’s got a cellist with temperament, surety, and purity, as well. Joshua Roman has been Town Hall’s Town Music Artistic Director for over a decade. (Have you bought your Town Music subscription yet? Do so!) Last season, Roman joined forces with other prominent cellists for a Town Hall event, A Cello Conspiracy. And, if you’re still keen for local cello music, did you know there’s a local nonprofit that provides cellos to recipients actively studying and performing? It’s the Carlsen Cello Foundation—an organization that helped give a young Joshua Roman one of his first great cellos.