Every week the Town Crier blog looks back at Seattle’s near-forgotten Town Crier magazine to see what was happening then and talk about what’s happening now. One of the largest sections of the original Town Crier was “What People Are Doing,” highlighting things like, “Miss Anna Roberta Hoge is ill,” and, “The Four Buttercups will present a novelty surprise in comedy singing.”  In this new series we’re revisiting the old column and tying it to our community’s current happenings, asking: “what are people doing?”

“One of the fastest growing sections of Seattle during the past few years,” the Town Crier reported on December 21, 1918, “is the Rainier Valley.” Indeed, “The Seattle Rainier Valley Railway Company has played an important part in the upbuilding and the steady march of progress of Rainier Valley.” The story goes on discussing improvements with an eye towards the future. “The next few years will undoubtedly witness an even greater growth.”

An organization today that plays an important part in the steady march of progress in Rainier Valley is the Rainier Arts Center, one of the organizations and venues that have been instrumental for Town Hall during our Inside/Out seasons. Some Town Hall events that have occurred there in the past year include talks by Dar Williams, Tali Sharot, Theo Gray, and Dr. Beverly Tatum, amongst others.

Rainier Arts Center’s mission is to “produce and facilitate a variety of artistic and cultural productions that are supported by our community.” A program of SEEDArts, Rainier Arts Center was purchased and renovated by SouthEast Effective Development whose mission is to improve the quality of life in Southeast Seattle. The Rainier Arts Center building has been in existence since 1921 and is now a national landmark building that marks the northern gateway to Seattle’s Columbia City neighborhood. The Center was originally built as the Fifth Church of Christ, Scientist. Town Hall’s building, currently under renovation, is the Fourth.

You can learn more about the Rainier Arts Center here. 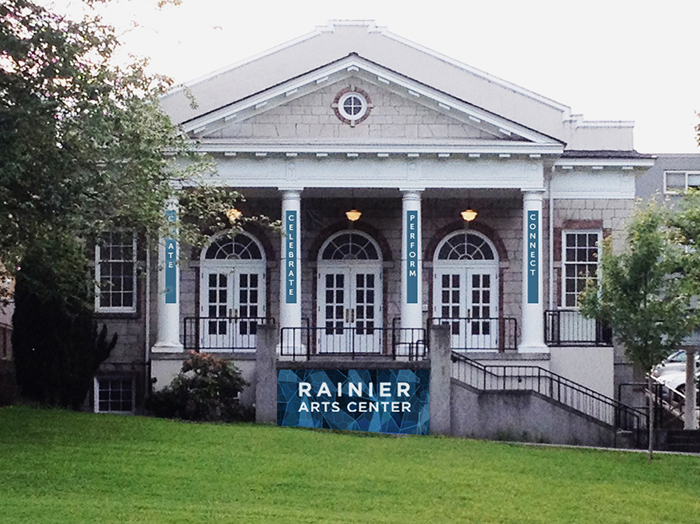