This spring, Town Hall is thrilled to welcome performance and visual artist Timothy White Eagle as our Artist-in-Residence. He has worked extensively over the past two decades exploring Native American, Pagan, and other earth-based spiritual practices. This will be a continued focus during his residency, as he interrogates the differences between early Indigenous peoples’ handling of death and the Christian colonizer approach to death, a topic that has been heavy on his mind in the time of COVID.

One of the roots of his work is thinking about how to decolonize a room that is shaped like a crucifix. Considering that relationship becomes even more poignant when thinking about our Town Hall historic building, which was originally the Fourth Church of Christ, Scientist. As with many Christian Science churches, this one is built to resemble a public building, with no religious symbolism inside or out—except the cross shape of the 860-seat sanctuary, now called the Great Hall, where White Eagle will present the culmination project of his residency on Sunday, June 20 during a six-hour durational open house performance.

White Eagle is a mixed-race, undocumented, urbanized Indigenous American artist and storyteller who was raised by adoptive white parents in working class Montesano, Washington. He was adopted at birth, and due to the circumstances of his adoption is not a registered member of any tribe. His art practices craft experiences and objects designed to heal both creator and audience, with his preferred mediums including objects, photography, performance, and installed stage. “All of my artwork stems from a ritual practice,” White Eagle said, in a video produced by The Stranger last spring. “I, with my work, am looking to heal parts of myself and parts of my community, and I have spent the last 20 years in some pretty intense environments learning about ritual and learning about traditional practice.”

This work began in the late 1990s, when White Eagle curated and performed in his landmark art/coffee house performance venue in Seattle called The Coffee Messiah, a space that is still lovingly missed by reviewers and community members. He spent his 20s exploring performance-based art, and in 1995, he began a mentor/protégé relationship with a Shoshone-Metis teacher, Clyde Hall. Around that same time, White Eagle began helping to craft personal and community rituals within his spiritual circles. 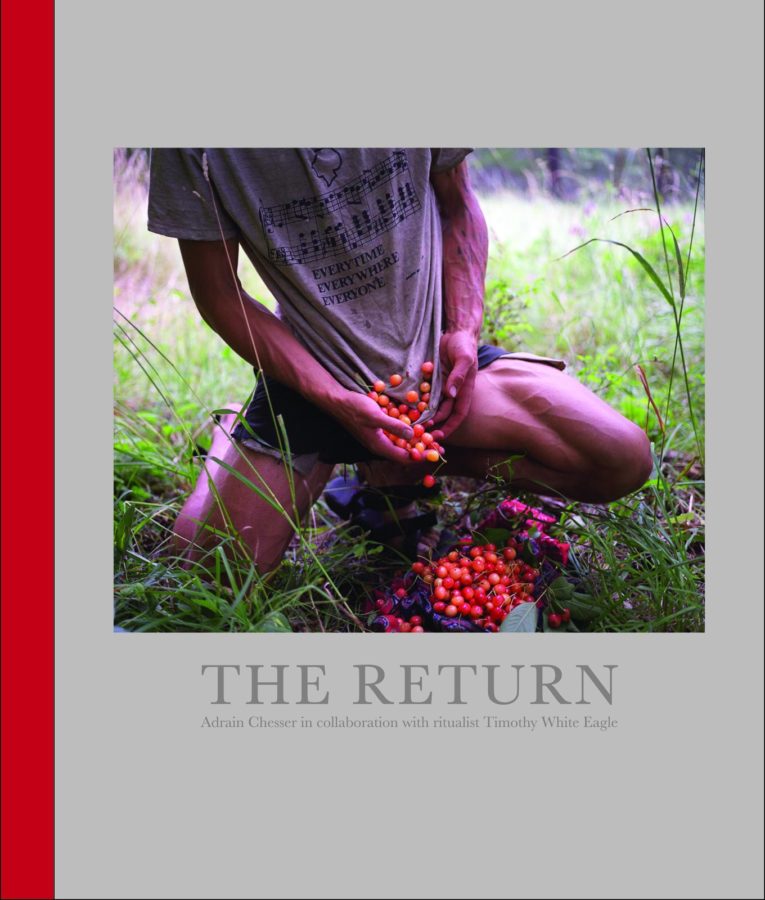 In 2006, he began collaborating with photographer Adrain Chesser, which led to the release of their book The Return in 2014.

White Eagle started working with MacArthur “Genius Grant” award winner Taylor Mac as a consultant on Native American content for Mac’s “A 24 Decade History of Popular Music,” which went on to become a finalist for the Pulitzer Prize in Drama in 2017. His consulting work led to a small role in the show’s NYC premiere, which further led to a job as Dandy Minion Artistic Director for the touring company of the same show.

In 2016, he returned to his interest in installed space, crafting major installations “The White Room,” followed in 2017 by “The Red Room.”

In 2019, he was the recipient of the three-year Western Arts Alliance/Advancing Indigenous Performance Launchpad Award. Native Launchpad aims to provide US-based Indigenous artists with the tools and resources needed to further their careers. That same year, he was commissioned to create a large installed space, “Songs for the Standing Still People,” as part of the yəhaw̓ show at King Street Station. (Read more about that installation here and find an article discussing it here.) He also received a commission to create temporary work for the AIDS Memorial Pathway in 2019.

In 2020, he was awarded a major Seattle CityArtist Grant for his project The Violet Symphony, which was intended to premiere at On the Boards in March and in New York in the fall of last year. White Eagle and his collaborators continue to brew and consider a performance for Fall 2021 in both Seattle and NYC.

Across the last year, he has been continuing to offer stories and spiritual practices to the community. Most especially that has happened on his Instagram. But also, a year ago now, he shared a video letter to the city, produced by The Stranger, where he offered a “simple, basic ritual that you can do all day long, many many times if you need to.”

Earlier this year, in January, he gathered us (virtually) around the campfire to share a story about the origin of our destructive consumption habits, the importance of holding each other in community, and his hopes for a reconnection with the cosmos for Seattle Neighborhoods’ Reimagine Seattle Storytelling Project. He served as artist-in-residence at legendary experimental theatre club La MaMa during winter 2021.

When asked what pieces of art have been bringing him comfort or joy over the last year, White Eagle noted, “I have been diving into the greatest hits of Indigenous writers: Ceremony by Leslie Marmon Silko, Tracks and Four Souls by Louise Erdrich, House Made of Dawn by M. Scott Momaday. I have read most of these decades ago, it’s been great to revisit [them].”

And when asked what he’s optimistic about right now? “The young people I know give me optimism, the ones I am connected with have an ability to see the world for what it is: on the one hand, make jokes, not take anything too seriously, and then hit the streets fists raised, seeking change.”

Join Town Hall and White Eagle on May 3 for a free program exploring historical death practices in Indigenous communities, and on June 20 in our Town Hall building for an open house performance honoring the longest day of the year. the Summer Solstice.