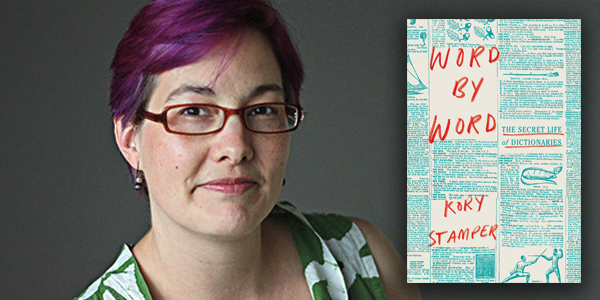 Kory Stamper is a lexicographer who worked for nearly two decades at Merriam-Webster dictionary, a world she reveals in the new book, Word by Word: The Secret Life of Dictionaries. She will be speaking about the book at her upcoming Town Hall event on Sunday, March 25th. In the meantime, Town Hall’s Jonathan Shipley spoke with her about her love of language, the lexical merits of emojis, and the wonderfully weird word that is ‘gardyloo.’

Get tickets for Kory’s upcoming event on 3/25.

You’re a lexicographer. For the common person, what is that?
A lexicographer is a writer and editor of dictionaries.

Have you always had an interest in words and writing and reading?
I always loved reading but really in high school I started loving individual words—the way that individual words sounded, or what they meant, or how they could be deployed.

I started blogging about language and then decided to write this book as a behind-the-scenes of how dictionaries are made but also to give people some kind of entry point into what English actually is. As a dictionary writer, you often hear from people who think English is dying and they complain that English is falling by the way side, and kids these days and so forth.

Texting and emojis…
Exactly. Soon we’re all going to devolve into gestures and grunts. But the reality is that all of things actually enrich English. English is such a resilient and wild and beautiful language. I wanted to write the book as a love letter to this oft-maligned language that is actually really inventive and beautiful.

Got a favorite word? How about least favorite? Editor at Merriam-Webster Kory Stamper joins us Sunday, March 25th with new #book “Word by Word”. Town Hall’s very own Jonathan Shipley spoke with Stamper recently. Tap the link in bio to read the full interview.

What do you hope readers gain from reading your book, then?
The recognition that language is dynamic and dictionaries are dynamic. That neither of those things are, or should be, static. Language changes at a really quick pace and that’s good and right, so dictionaries should also change and that is also right.

I suppose people are often surprised that dictionaries don’t just sit at the library, the giant tome opened up. I’m assuming a lot of people believe that’s still the case. It’s just a thing that existed and it is never edited, reworked, redone. It’s just like the Bible.
The analogy of the Bible is a really good one because it’s not that it doesn’t move or change but for some people the dictionary has this elevated status. It is the arbiter of good English. It tells you exactly where the language is. That’s just not the case. Dictionaries just record the language which is terrifying when people realize what that means. The language is pretty wild. You can’t really stuff it into a box very easily.

Do you get complaints when people think there’s a word that isn’t elevated enough to be placed in the dictionary?
They’ll always find something that they don’t think deserve to be in the language. Dictionary.com just this week announced that they’re trying something new. They’re going to enter some emoji into their dictionary. From a lexical and linguistic standpoint, emoji are used as lexical items. So that makes sense. The response to that has been like Dictionary.com is blowing up the English language. Because people are responding with ‘Those aren’t words.’ ‘That’s not real communication.’ ‘Only kids use those.’ People find just amazing things to complain about whenever a dictionary does anything.

Off the record.
Lexicographers are people, too. We all have our own likes and dislikes. I cannot stand the word impactful. I understand that is an irrational dislike. I’m completely aware of how irrational that is. I’ve had to revise the entry for impactful, so I’m very aware of how current it is. It’s just a word I don’t like.

What are some of your favorite words?
One word I love because it makes me laugh that there is a word for this and that there’s enough use of it for it to merit entry into the dictionary is the word gardyloo. Its definition is something like “used as a warning cry in Edinburgh when it was customary to throw slop out the upper story window” I love that there’s a word for that.

The specificity!
Yeah! Only in Edinburgh. Only during this time when it was customary. I love that. Etymologists, people who study word histories, think that gardyloo actually comes from French. Which tells you something about not just the time this was used but also that there was a time when Scotland was under French rule. But it’s a ridiculous word! But I love that it’s ridiculous. I love that it has a place in the language.

For more from Kory Stamper come see her on Sunday, March 25th at 6:00pm at Seattle University, presented by Town Hall Seattle. Thanks for listening.