Disco Hippos and Laughing Your Head Off with Caspar Babypants

Late nights and ear damage helped convince Chris Ballew that perhaps there was something new in store for him during his run as lead singer of Presidents of the United States of America. The band was a big deal in the 1990s. The Seattle-based Presidents released a self-titled debut album in 1995 and it peaked at No. 6 on the Billboard 200 and their song “Peaches” garnered the band their first and only Billboard Hot 100 Hit. “Kitty,” “Lump,” and “Dune Buggy,” were other popular tunes on that influential album.

Yes, the band was popular (they formed in 1993 and dissolved in 2015 since, as Ballew posted on the band’s Facebook page, “we are OLD PEOPLE NOW!”), but there was an itch during their reign that Ballew knew he wanted to scratch.

JS: When you put out a new kid album, is it focused on a particular theme/idea?

CB: I don’t make themed albums as a rule but I do have a few that fit that description. There’s a holiday record, two Beatles cover albums, and two lullaby records in my library of releases. I grew up on Sgt. Peppers by the Beatles and the way that record took me on a wild psychedelic ride still influences how I make records. I want the families that buy my records to feel that same sense of being on a ride when they listen to them. For me the themed record is too much of a limitation, and I prefer the kaleidoscope of weirdness that a non-themed record can achieve. But in a general sense the theme is always bizarre little stories that I turn into songs that make me laugh!

JS: Are there commonalities between playing shows for kids v. adults?

CB: When I play a show for kids I still feel that thrill of connecting to an audience and the interplay between my music and their happiness. If the parents are paying attention and participating then I get to do some of the same call and response type stuff that I can do with an adult crowd. The fun of the mechanics of doing a show is the same, too. I always feel like I am setting up for the circus during load in and sound check. I love that feeling and I still get to experience it with my shows for families.

CB: The first major difference is the time of day. My shows for families happen at 10:30 am for the most part. The days of stumbling to bed at 2:30am after an 11:00pm set time are blissfully behind me! Another difference is the venue. I’m playing in beautiful old theaters or library meeting rooms or YMCA gymnasiums instead of dark, dirty, stinky, smelly rock clubs. That is another change I’m very happy about. This time around I’m booking all of my own shows so another big difference is that that I’m responsible for all of that stuff. We used to have a booking agent and manager in the rock band so I didn’t have a lot of responsibility on that level. Now it’s all on me!

JS: I see you have a song on your new album called Dropped My Lollypop. That sucks for kids. What small things inconvenience you?

JS: Your “Disco Hippo” song – quite a hip swaying, toe tapping tune. What genre of music do you think is the funniest?

CB: I think really fast bluegrass music is hilarious. There’s also an electronic artist name Squarepusher who makes it insanely fast music that sounds like synthesizers on speed playing crazy jazz. I put that on the car while I drive around and laugh my head off!

JS: What spurred you to turn from rock music to kid music?

CB: The entire time I was having success in the 90s I also had I got feeling that that success was not my final destination. I spent about 14 years hunting outside the rock band for another form of expression that would scratch that itch. Finally I figured out that simple innocent music for children was what really resonated with me in a way that was perfect. I feel like the music I make now is exactly what I really am as a person. I am way more like a child than a grown-up. The rock band was extremely close but it just wasn’t exactly right. Late nights and ear damage convinced me that I had to find something else. When I figured out I was supposed to be making this music I was incredibly relieved.

JS: What’s your favorite thing about performing for kids?

CB: As an adult I want to live in a state of imagination and wonder. I want to be able to rearrange the world in my mind to be hilarious and bizarre and entertaining. I want to find the innocent perspective necessary to really see the natural world as the greatest show on earth. I think kids have that perspective baked into their innocence. I love being around that energy and I love helping families bond over music that they can all truly love. 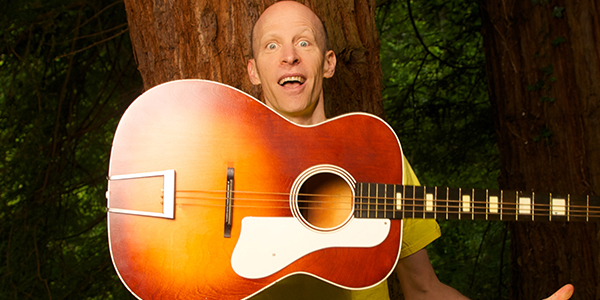