The High Cost of Living With Conviction 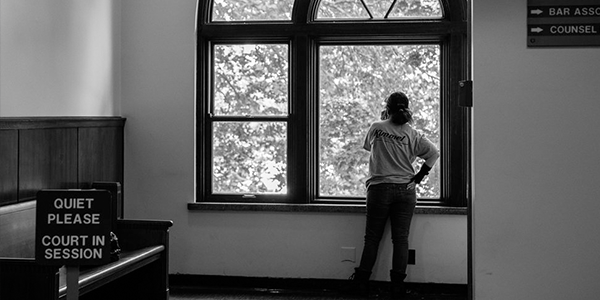 Keshena is $50,000 in debt; she’s filed for bankruptcy. Her husband and step-father are serving time in prison, leaving her to care for her two young boys. She has served time herself, and has found it immensely difficult to raise a family and readjust to everyday life on top of paying Washington’s Legal Financial Obligations (LFOs). Michael is a disabled veteran. He served a five-year sentence in prison and was ordered to pay $11,000 in LFOs. Despite the $75 a month he’s paid for the last five years, he now owes $17,000 due to interest. Sue suffered from poverty and abuse in her early life, and soon found herself the victim of domestic violence and drug addiction. She served 15 months in prison over a decade ago, and is still paying off legal fees to the state of Washington—most of which are accrued interest.

Deborah Espinosa knows Keshena, Michael, Sue, and many others in our state saddled by crippling debt due to fines, fees, and victim restitution costs. Espinosa’s research on debtors’ prisons in Africa (and in the US) has made her eager to humanize these legal issues—eager to put a face to the problem. That’s why Espinosa founded the visual storytelling project “Living With Conviction”, composed of her photos of individuals suffering from the seemingly inescapable financial burden of Washington’s legal system. “It’s a visual storytelling project about how the State of Washington sentences people to not just prison, but to a lifetime of debt.”

Sabrina: “$39,000 in fines doesn’t affect somebody who doesn’t care. It doesn’t affect a junkie in a basement shooting up. . . . But for somebody like me, doing everything they are supposed to be doing, . . . People should care. They could arrest me. I live in fear of it. But I just don’t have the money.” * Sabrina and her husband have six children and one baby girl on the way. As a child and into her teens, she was emotionally, physically, and sexually abused. She started using methamphetamines at 17 to to connect with her mother. * This project, “Living with Conviction: Sentenced to Debt for Life in Washington State” is on the impacts of court-imposed legal financial obligations (LFOs) on formerly incarcerated individuals and their families in Washington State. LFOs accrue interest at an interest rate of 12%. Failure to make one payment can result in arrest. * Right now, the State Legislature is considering House Bill 1783 to reform LFOs. * “It’s an act of love and an act of faith to allow yourself to feel the pain of another.” * ~ Isabel Wilkerson * #Livingwithconviction #Massincarceration #LFODebtforLife #VisualizeJustice #cjreform

“My intent with this project is to amplify the voices of formerly incarcerated individuals who are struggling to survive, and thereby bring an end to the imposition of such costs on the poor and marginalized.” She believes the purpose of law is to serve communities and level the playing field, creating a more just society. And according to her, Washington’s LFO policies do the opposite. She sees the LFO policy as designed to fund the criminal justice system on the backs of the poor and racial minorities, perpetuating cycles of incarceration and poverty. On her website, Espinosa decries this cycle as fundamentally unjust and asserts that Washington’s LFO system “represents institutional discrimination and structural racism at their finest.”

“Living With Conviction” is Espinosa’s way of introducing us to the people in Washington who are suffering from LFOs—showing us their faces and enshrining moments from their lives in photography. “It is about formerly incarcerated individuals as they struggle to re-enter their communities following prison, burdened with substantial debt, as well as obstacles to finding housing and jobs.” Espinosa’s work has appeared in The Chronicle of Philanthropy, Foreign Affairs, O Magazine, and the Harvard International Review, among other publications. Her work is currently in a 10-year exhibit at the Canadian Museum of Human Rights.

“Visual storytelling makes us all realize that we are talking about real people,” says Espinosa. She uses the hashtag #VisualizeJustice to catalog her work, and to illustrate the inequality issues of LFOs not as abstract legal concepts but in terms of the people they affect. “As an attorney, an officer of the court, I feel a sense of responsibility to correct legal and structural wrongs.”

“A goal of mine is for people to open their hearts to this population.” This population includes Keshena, Michael, Sue, and all those Deborah Espinosa has photographed—and all those still faceless in the state’s criminal justice system.

“Whether we are incarcerated or not, we still are living marginalized lives. . . . You are taking away access to the American dream. Everybody should be entitled to that – to be able to work hard and see the benefits of their hard work. And not to be penalized for things that maybe happened years ago. Things that happened as a result of a disease. Addiction, alcoholism, or mental health.” ~ Carmen . . . This project, “Living with Conviction: Sentenced to Debt for Life in Washington State” is on the impacts of court-imposed legal financial obligations (LFOs) on formerly incarcerated individuals and their families in Washington State. LFOs accrue interest at an interest rate of 12% from the day of sentencing. Failure to make one payment can result in arrest. . . . Right now, the State Legislature is considering House Bill 1783 to reform LFOs. . . . @acluwa @marshallproj #Livingwithconviction #Massincarceration #LFODebtforLife #cjreform #documentaryphotography #VisualizeJustice

Deborah Espinosa will be joining Peter DiCampo—Town Hall’s Inside/Out Neighborhood Resident for the U District and Ravenna—to discuss Living With Conviction and the power of documentary photography as a tool to oppose poverty and inequity. Join us on March 27 at University Lutheran Church and explore Espinosa’s photographic struggle against injustice.