A Five-Decade Debate as Important as Ever: James Baldwin and William F. Buckley Jr.

On February 20 at Town Hall, Nick Buccola brings to the the stage a debate about race reverberating 50 years on.

“I knew I was black, of course, but I also knew I was smart. I didn’t know how I was going to use my mind, or even if I could, but that was the only thing I had to use.” James Baldwin grew up poor in Harlem in New York City. His stepfather treated him harshly, so from a young age Baldwin retreated to libraries where he read and started to write. By his 35th birthday, he’d become one of America’s great writers, penning such books as Go Tell It On the Mountain and Notes of a Native Son. He also came to be considered one of America’s great thinkers and human rights advocates, stepping forward to guide critical discussions in the Civil Rights Movement of the 1960s.

“Liberals claim they want to give a hearing to other views, but then are shocked and offended to discover that there are other views.” William F. Buckley Jr. was born in 1925, not long after Baldwin, in the same city. Privileged, his mother filled their home with servants and tutors. Buckley attended Yale, became an informant for the FBI, and worked for a time with the CIA. He also founded National Review, a publication that has become a prominent voice on the American right and has played a significant role in the development of conservatism in the United States.

These two men—diametrically opposed intellectuals—met at the University of Cambridge on February 18, 1965. There they debated the question “Has the American Dream been achieved at the expense of the American Negro?” Yes, said Baldwin. “I picked the cotton, and I carried it to market, and I built the railroads under someone else’s whip for nothing.” No, said Buckley. “The fact that your skin is black is utterly irrelevant to the arguments you raise.” Buckley positioned himself in the debate as a reasonable moderate, one that resisted social transformations Baldwin sought—in particular, desegregation. “The fundamental friend of the Negro people of the United States is the good nature and is the generosity and the good wishes…the fundamental decency,” Buckley said, “of the American people.”

Fifty-some years later, debates on race relations are still at the fore of our country. Viewpoints on race are still in sharp contrast; in a 2018 Gallup Poll 54% of non-Hispanic whites said black and white relations are good, as opposed to 40% of blacks who said the same. This is marked drop even from 2001 where 70% of blacks said relations were good—more so, at that time, than whites (62%).

On February 20, Linfield College professor of political science Nicholas Buccola joins us to tell the full story of the Baldwin Buckley debates. His book The Fire Is Upon Us: James Baldwin, William Buckley Jr, and the Debate Over Race in America explores the radically different paths of Baldwin and Buckley and the controversies that followed their fraught conversations. Buccola shows how the decades-long clash between these two men illuminates America’s racial divide today and echoes the necessary work still to be done by liberals and conservatives alike.

Buccola delves into Baldwin and Buckley’s conversation as a remarkable story of race and the American dream that still resonates today—an unforgettable confrontation that pitted Baldwin’s call for a moral revolution in race relations against Buckley’s unabashed elitism and implicit commitment to white supremacy. 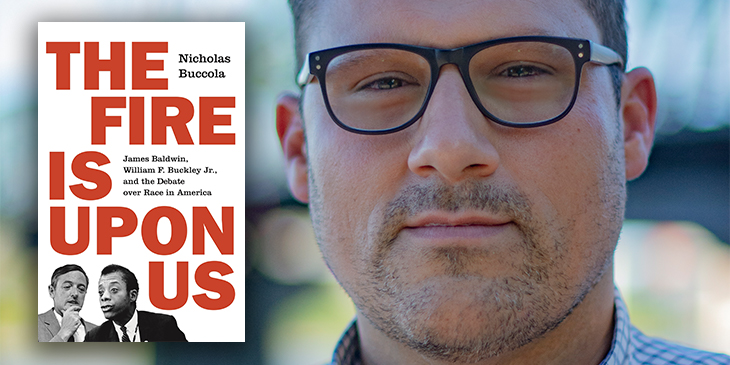 Join us on February 20 for this important talk. Tickets are on sale now ($5, and FREE for anyone under the age of 22).