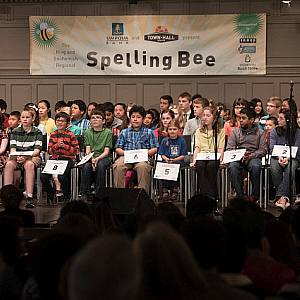 Want to watch 90 middle-schoolers knock out words like zwieback, alluvium, and peccadillo? So do we. The regional spelling bee brings together students from schools across King and Snohomish Counties who have already proven themselves to be fantastic spellers. This year’s bee will be moderated by Seattle Radio Theatre founder and KIRO Radio’s producer, host, and historian Feliks Banel. The last one standing advances to the annual Scripps National Spelling Bee in Washington, D.C. Amy Marie Dimak was the last national champion to hail from this area (her word was fibranne). Maybe one of our standout students will do the same in 2017.

Seattle Channel will broadcast this event live online, and Seattle cable TV subscribers can watch on channel 21 on Comcast and Wave and channel 8003 on CenturyLink.

Presented by: Town Hall Seattle and