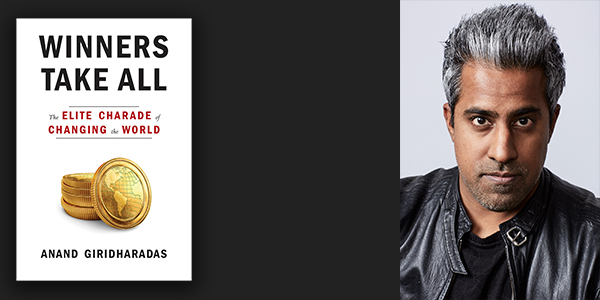 This event is sold out. There will be a standby line at the door.

What do we do when our society’s economic elite become more interested in celebrating their own magnanimity than bringing about real change? Former New York Times columnist Anand Giridharadas takes Town Hall’s stage to present perspectives from his latest book Winners Take All: The Elite Charade of Changing the World. He decries the modern gilded age where the rich and powerful have rebranded themselves as saviors of the poor—constantly seeking to do more good, but never less harm. He outlines ways which the socio-economic elite are doing everything in their power to preserve their position at the top of the social order while lavishly rewarding “thought leaders” who redefine change in winner-friendly ways. Giridharadas advocates for widespread support of institutions dedicated to benefiting public, rather than relegating society’s gravest problems to be solved by an unelected and self-interested upper crust. Join Giridharadas for a critical discussion about building more egalitarian institutions for addressing the ills of the world.

Anand Giridharadas is the author of The True American and India Calling. He was a foreign correspondent and columnist for The New York Times from 2005 to 2016, and has also written for The Atlantic, The New Republic, and The New Yorker. His writing has been honored by the Society of Publishers in Asia, the Poynter Fellowship at Yale, and the New York Public Library’s Helen Bernstein Award.