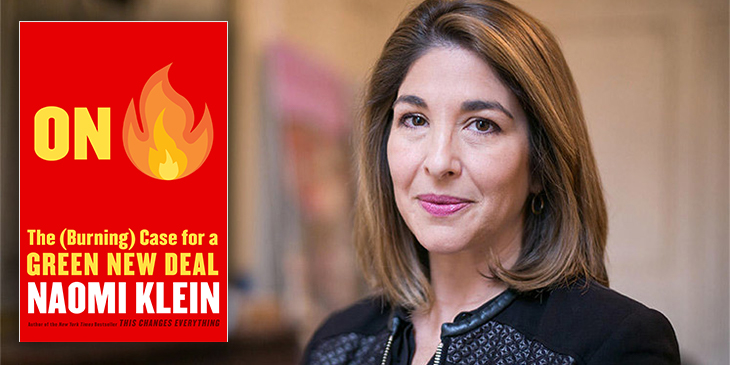 For more than twenty years, Naomi Klein has been the foremost chronicler of the economic war waged on both people and planet—and an unapologetic champion of a sweeping environmental agenda with justice at its center. Klein joins us at Town Hall with insight from On Fire: The (Burning) Case for a Green New Deal, a report from the front lines of contemporary natural disaster that offers prescient advisories and dire warnings of what future awaits us if we refuse to act—as well as hopeful glimpses of a far better future.

In conversation with Seattle City Councilmember Teresa Mosqueda, Klein investigates our modern climate crisis not only as a profound political challenge but as a spiritual and imaginative one. She delves into topics ranging from the clash between ecological time and our culture of “perpetual now,” to the soaring history of humans changing and evolving rapidly in the face of grave threats, to rising white supremacy and fortressed borders as a form of “climate barbarism.” Join Klein and Mosqueda for an expansive, far-ranging exploration that sees the battle for a greener world as indistinguishable from the fight for our lives, and a rousing call to action for a planet on the brink.

Naomi Klein is an award-winning journalist, syndicated columnist and author of the New York Times and international bestsellers, No is Not Enough: Resisting Trump’s Shock Politics and Winning the World We Need, This Changes Everything: Capitalism vs The Climate, The Shock Doctrine: The Rise of Disaster Capitalism, and No Logo.

Teresa Mosqueda is the Position 8 representative on the Seattle City Council in Washington. Mosqueda won a first term in the general election on November 7, 2017. Mosqueda is a former consumer advocate for the Washington Affordable Care Act Exchange Board. She has also worked for the Children’s Alliance and the Washington State Labor Council.