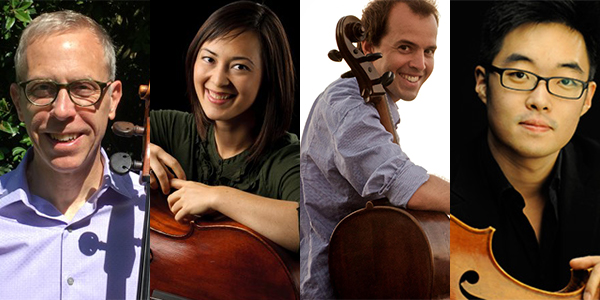 The familiar welcome of the cello is an iconic choice for the inaugural concert of our 2019-20 Town Music season. To showcase the range of the instrument and bridge compositional styles both classical and modern, series Artistic Director Joshua Roman presents a selection of four talented Seattle Symphony cellists. First, they ruminate on the cello’s iconic sound with a curated array of works originally written for a cello quartet. Then Roman takes the stage alongside this quartet to perform unique and clever new arrangements that redefine the boundaries of the cello and explore the limits of what the instrument can do. Listen in for an evening of performances blending traditional cello quartet and ambitious cello experimentation.

Efe Baltacigil is the Seattle Symphony’s current principal cellist, and is the winner of the 2005 Peter Jay Sharp Prize and the 2006 Washington Performing Arts Society Prize. Meeka Quan DiLorenzo held the title of Associate Principal Cello of the Utah Symphony for five seasons before joining the Seattle Symphony in 2009. Eric Han made his concerto debut with the Toronto Symphony Orchestra at the age of 14 and has performed at festivals in America and abroad, including the Moritzburg Festival and Music@Menlo. Charles Jacot is a member of the Pacific Northwest Ballet Orchestra and a frequent sub for both the Seattle Opera and Seattle Symphony. Joshua Roman has earned an international reputation for his wide-ranging repertoire, artistic leadership, and versatility. As well as being a celebrated performer, he is recognized as an accomplished composer and curator, and the Artistic Director for Town Hall’s Town Music series.