Skip to content
In The Moment Podcast, Ep. 112
Yanis Varoufakis with Steve Scher
Another Now 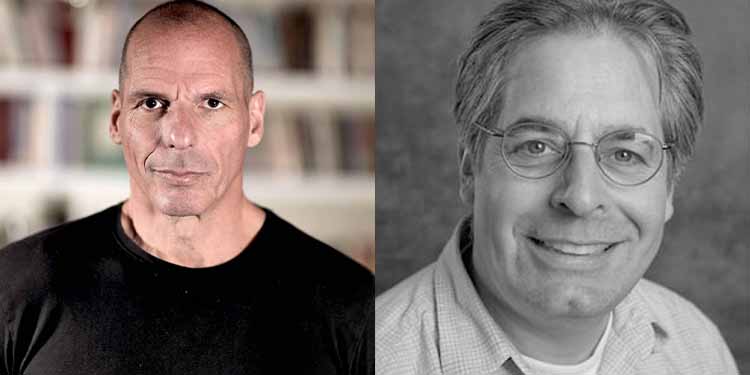 What might a post-capitalistic world look like? Can money, jobs, and politics be truly democratized? Will banks cease to exist? Globally recognized economist Yanis Varoufakis dreams up an alternative reality to give us a glimpse of what such a world might look like in his new work of science fiction, Another Now.

Varoufakis, the former finance minister of Greece, has spent a lifetime immersed in issues of the global economy. In Another Now, his unique economic expertise and deep understanding of debt crises are woven into a narrative filled with all the stuff of sci-fi dreams: a parallel universe; cosmic wormholes; secret technology; and DNA doubles. However speculative the fiction, none of it is as far-fetched as it might seem. In the 112th episode of Town Hall’s In the Moment podcast, Steve Scher talks with Varoufakis about how a realistic, democratic alternative to our present reality is already taking shape all around us.

Yanis Varoufakis was born in Athens in 1962, and is former finance minister of Greece; he is currently Professor of Economics at the University of Athens. Prior to entering the government, Varoufakis was a professor of economics in Britain, Australia, and the U.S. for many years. Since resigning from Greece’s finance ministry, he has co-founded an international grassroots movement, DiEM25, campaigning for the revival of democracy in Europe and speaking to audiences of thousands worldwide. He is the author of several international bestselling books, including Talking to My Daughter: A Brief History of Capitalism.