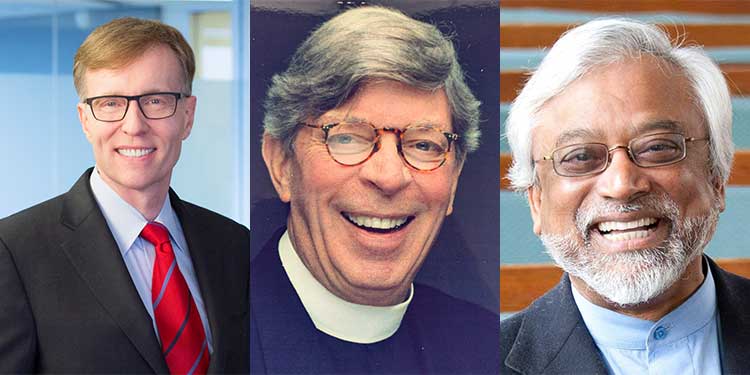 Join us for the final Civic Cocktail of 2020. Settle in at home and join us virtually as we discuss topics related to the general election. In the first segment, former Washington Attorney General Rob McKenna (Republican), and an intriguing Democrat soon to be announced, discuss the election results from the previous night. Will there be a clear mandate? Where do the parties go from here? How might they work together after this long election season? In the second segment, Pastor Don Mackenzie and Imam Jamal Rahman from the Interfaith Amigos join us to focus on the positive. These men come from different faiths but work together in friendship and goodwill in the community. Join us for this warm conversation as a way to start your holiday season.

Rob McKenna served as Washington State Attorney General from 2005-2013, was elected President of the National Association of Attorneys General, and was a member of the King County Council from 1996 to 2005. Currently, McKenna is a partner in Orrick, Herrington and Sutcliffe’s Seattle and Washington, D.C. office. He leads the state Attorney General team in the firm’s Public Policy Group and is a member of Orrick’s top-rated Cyber, Privacy & Data Innovation practice.

Imam Jamal Rahman is a popular speaker on Islam, Sufi spirituality, and interfaith relations. Along with his Interfaith Amigos, he has been featured in the New York Times, on CBS News, the BBC, and various NPR programs. Co-founder and Muslim Sufi minister at Interfaith Community Sanctuary, author, and adjunct faculty at Seattle University, Rahman travels nationally and internationally, presenting at conferences, retreats, and workshops.

Don Mackenzie is a native of Chicago, Illinois and was raised in several college campuses in the mid-western United States. After graduating from Princeton Seminary, he became Associate Director of Field Education at Princeton (1971-1980), Associate Minister at Nassau Presbyterian Church in Princeton (1980-1983), Pastor of the Church of Christ at Dartmouth College, Hanover, New Hampshire (1983-1995), and Minister and Head of Staff at University Congregational United Church of Christ in Seattle (1995-2008). He is a founding member of the interfaith team, the Interfaith Amigos. His country music band, Life’s Other Side, has performed at the Ernest Tubb Midnight Jamboree at the Grand Ol’ Opry in Nashville.