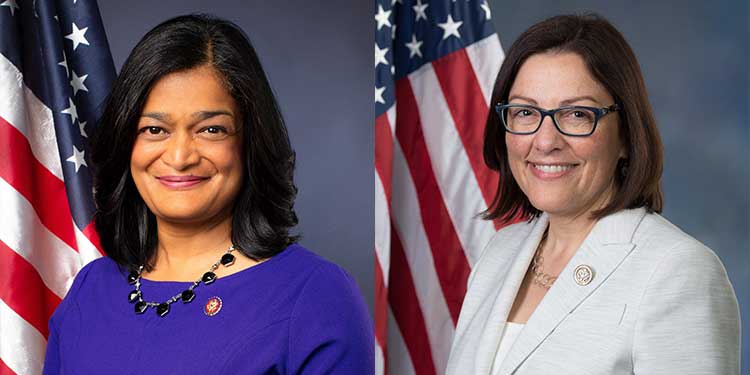 What’s ahead for Republicans, Democrats, and Independents when it comes to civics in our country and communities? How can we work together when parties are often divided themselves? This April Civic Cocktail continues an intended multi-part, multi-party series begun in February.

With a new administration in the White House, local leaders discuss the next steps for the Democratic Party in D.C., bridging the political divide, and how their national work impacts communities here in Washington State. Join CityClub for a virtual Civic Cocktail program with host Joni Balter and guests Congresswomen Pramila Jayapal and Suzan DelBene to be part of the conversation.

As a 40-year-old nonpartisan, civics-focused nonprofit, Seattle CityClub provides a platform for insightful and educational conversations that include a diverse range of opinions. But sometimes we need to dive deeper into a particular topic, so we can listen and engage in a more thoughtful manner with our community.

Congresswoman Pramila Jayapal is a former Washington State Senator and a lifelong organizer for immigrant, civil, worker, and human rights. She was just re-elected to Congress for a third term with more votes than any Member of the House of Representatives. In 2016, she became the first South Asian American woman ever elected to the House. After coming to the United States alone at the age of 16, she later started the largest immigrant rights group in Washington State and is currently one of only 14 immigrants serving in Congress. As the Chair of the Congressional Progressive Caucus, Representative Jayapal is the lead sponsor of the Medicare for All Act, the College for All Act, the Housing is a Human Right Act, and the Roadmap to Freedom Immigration resolution. She currently serves on the Judiciary, Budget, and Education and Labor committees. Congresswoman Jayapal lives in West Seattle with her husband Steve.

Congresswoman Suzan DelBene represents Washington’s 1st Congressional District. First sworn into the House of Representatives in 2012, Congresswoman DelBene brings a unique voice to the nation’s capital, with more than two decades of experience as a successful technology entrepreneur and business leaders. She currently serves as the Vice Chair on the House Ways and Means committee, and the Select Revenue Measures and Trade Subcommittees. In the 116th Congress, she was appointed to the Select Committee on the Modernization of Congress. Congresswoman DelBene also serves as the Chair of the New Democrat Coalition and co-chair of the Women’s High Tech Caucus, Internet of Things Caucus, and Dairy Caucus. Before being elected to Congress, Congresswoman DelBene served as Director of the Washington State Department of Revenue.