Skip to content
In The Moment Podcast, Ep. 114
Tina Campt with Elisheba Johnson
Contemporary Black artists who are changing the way we see 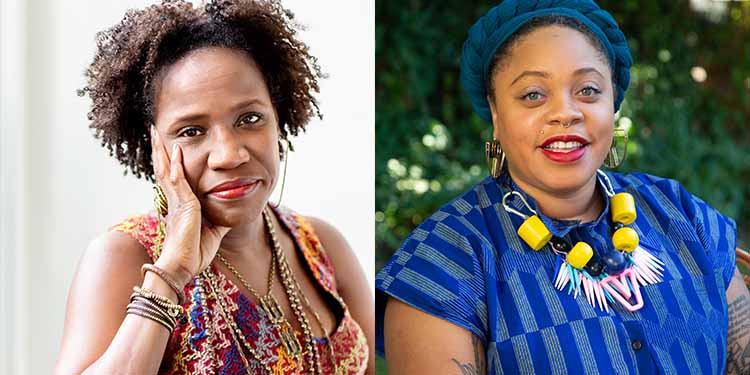 Visual art holds the extraordinary power to connect the dots between ideas or emotions, the person thinking or feeling them, and the outside viewer; but how might the viewer go beyond simply looking to experiencing art, in all its joys and especially in its challenges and discomforts?

In the 114th episode of Town Hall’s In the Moment podcast, Elisheba Johnson interviews Tina Campt about her latest book, A Black Gaze. In the book, Campt explores the work of eight contemporary Black artists who are shifting the nature of visual interactions with art and demanding that Blackness be seen anew. She considers, “Rather than looking at Black people, rather than simply multiplying the representation of Black folks, what would it mean to see oneself through the complex positionality that is Blackness — and work through its implications on and for oneself?”

The featured artists’ work includes the portraiture of Deana Lawson, the video of Arthur Jafa, the film of Khalil Joseph, the photography of Dawoud Bey, and the multimedia practices of Okwui Okpokwasili, Simone Leigh, and Luke Willis Thompson. Through their work, Campt discusses how seeing — especially seeing Blackness — cannot be the passive act of simply looking; it must be actively felt with, through, and alongside the experiences of the Black artist.

Tina M. Campt, a Black feminist theorist of visual culture and contemporary art, is Owen F. Walker Professor of Humanities and Modern Culture and Media at Brown University and a Research Associate at the VIAD (Visual Identities in Art and Design Research Centre) at the University of Johannesburg. She is the author of Image Matters: Archive, Photography, and the African Diaspora in Europe, Listening to Images, and other books.

Elisheba Johnson Elisheba Johnson is a multimedia artist, curator, and organizer based in Seattle. Along with her father, Charles Johnson, she created the young adult science-fiction series, The Adventures of Emery Jones, Boy Science Wonder. She is also one of the co-founders of Wa Na Wari a Black arts center in Seattle’s Central District that uses art to fight displacement.