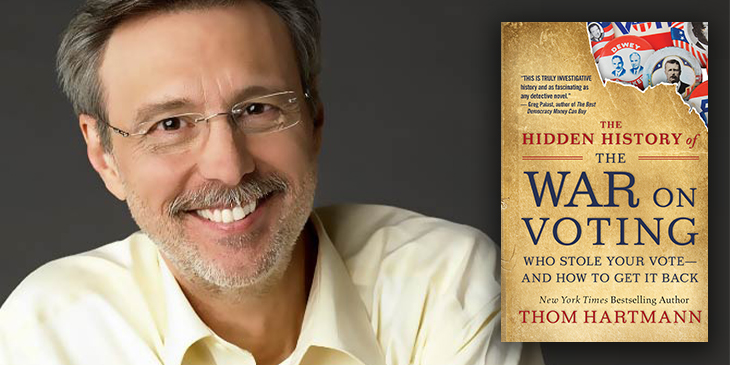 Donald Trump was elected by only 26 percent of eligible voters. In America today, only a slim majority of people register to vote and a large percentage of registered voters don’t bother to show up at all. And according to progressive radio host Thom Hartmann, this low turnout is unfortunately not a bug in our system—it’s a feature.

Hartmann joins us at Town Hall to demystify strategies and tactics that conservative elites in our country have used to protect their interests by preventing “the wrong people”—such as the poor, women, and people of color—from voting, while making it easier for the wealthy and white. He lays out simple, common sense ways that we the people can fight back and reclaim our right to rule through the ballot box. Take an unblinking look at our country’s voting system, and explore what we can do to ensure everyone has a voice in this democracy.

Thom Hartmann is a progressive national and internationally syndicated talk show host and bestselling author of 24 books, including The Last Hours of Ancient Sunlight, The Hidden History of Guns and the Second Amendment, The Last Hours of Humanity: Warming the World to Extinction, and Rebooting the American Dream: 11 Ways to Rebuild Our Country.

Congresswoman Pramila Jayapal is the representative for Washington’s 7th District, which encompasses most of Seattle and surrounding areas. She is the first South Asian American woman elected to the U.S. House of Representatives and one of only 14 naturalized citizens currently serving in the United States Congress.