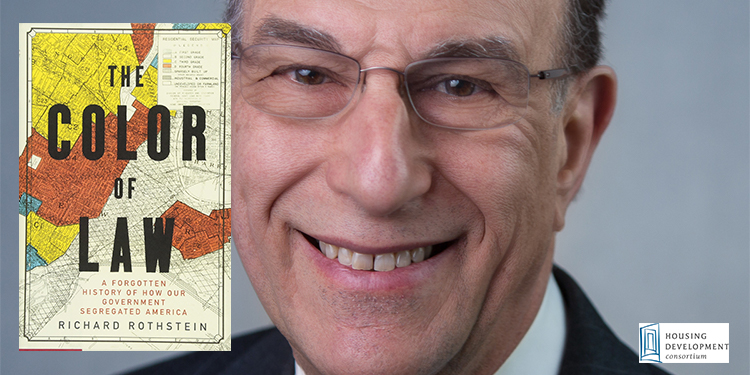 Segregation in America—the incessant kind that continues to dog our major cities and has contributed to so much recent social strife—is the byproduct of explicit government policies at the local, state, and federal levels, researcher Richard Rothstein argues. He believes this is especially true for the racial segregation in our neighborhoods.

In this presentation with the Housing Development Consortium of Seattle-King County, Rothstein joins us to share findings from his book The Color of Law: A Forgotten History of How Our Government Segregated America. With an eye to how the structural conditions established by 20th century federal policy endure to this day, Rothstein explores the legacy of discriminatory practices. Following his talk, Rothstein joins a panel of local experts to discuss how both the history of colonization and the history of redlining manifest in Seattle’s housing crisis, as well as considering both current and proposed housing policies. Moderated by Seattle Foundation’s Michael Brown, the panel features Colleen Echohawk of Chief Seattle Club, Councilmember Teresa Mosqueda, and Councilmember Claudia Balducci. Don’t miss this essential and timely conversation about how the history of neighborhood segregation impacts Seattle today.

This event is part of Affordable Housing Week, and is supported by West Coast Poverty Center, Seattle for Everyone, Pacifica Law Group, and Whatcom Housing Alliance.

Richard Rothstein is a research associate of the Economic Policy Institute and a Fellow at the Thurgood Marshall Institute of the NAACP Legal Defense Fund. He lives in California, where he is a Fellow of the Haas Institute at the University of California-Berkeley.

Colleen Echohawk is the Executive Director of the Chief Seattle Club, a nonprofit dedicated to the needs of Native American and Alaska Native people who are experiencing homelessness in Seattle. She is an enrolled member of the Kithehaki Band of the Pawnee Nation and a member of the Upper Athabascan people of Mentasta Lake. She also founded the Coalition to End Urban Native Homelessness.

Teresa Mosqueda is Budget Chair of the Seattle city council, elected in 2017. Her top priority on City Council is promoting healthy communities, lifting up working families, and creating more affordable housing for all residents through the city. She chairs the Housing & Finance Committee, and is a member of the National League of Cities.

Claudia Balducci is Chair of the King County Council. She is a leader in transportation and affordable housing, and a strong advocate for education and the arts. She serves as chair of the Sound Transit Board’s System Expansion Committee, vice president of the Puget Sound Regional Council, and chair of the County’s Affordable Housing Committee.

Michael Brown is the Chief Architect of Civic Commons at the Seattle Foundation, a regional civic infrastructure aimed at uniting more community voices in decision-making to advance racial and economic equity. He has led efforts to tackle complex challenges in the areas of affordable housing, economic and racial equity, policy, and advocacy.