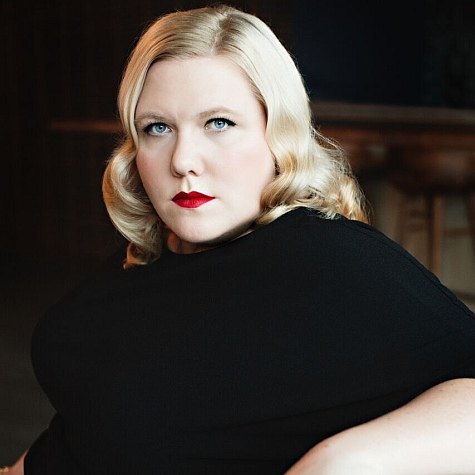 Now in its 13th year, Talk of the Town is our annual fundraiser. Start your evening at a Town Hall cocktail party featuring Congresswoman Pramila Jayapal, bestselling Seattle author Lindy West, poet, writer, and activist Chinaka Hodge, and drag superstar BenDeLaCreme. Then proceed to one of 12 fabulous dinner parties hosted in signature Seattle spaces and catered by top Seattle chefs. Each of these intimate gatherings will be attended by two local luminaries. (This year, they’re all women!)

You probably know that most of our programs are just $5—Town Hall’s annual “big night” is a big part of keeping them that way. A portion of your dinner ticket supports Town Hall and its programming, and is considered a charitable contribution.

Can’t attend Talk of the Town this year? Consider making a donation in lieu of attendance.

Artist Ginny Ruffner invites you to her studio, home, and beautiful garden in historic Ballard.

Poet, actress, educator, and writer Chinaka Hodge has had her work featured in Newsweek, NPR, PBS and more. In her free time, she performs as one of the founding members of hip-hop collaborative ensemble, The Getback. Vivian Phillips is a veteran communications professional, arts administrator and arts advocate in her third term as Chair of the Seattle Arts Commission; she is also a co-founder of The Hansberry Project, and served as co-chair to establish the Historic Central Area Arts and Cultural District.

Jason Stratton is the Executive Chef of Mamnoon and the newly opened Mbar. His accolades include “Best New Chef” in Food & Wine, “Best New Restaurant” in Bon Apetit, and he has been a James Beard semi-finalist and contestant on Top Chef.

Lynne Haas is the Deputy Director of Engines for Blue Origin, and is a mechanical engineer with a focus on liquid rocket engines. Deputy Mayor of Operations for the City of Seattle, Kate Joncas has over 30 years of experience in downtown revitalization in the private, public, and nonprofit sectors in communities around the world.

Consultants and advocates for progressive change, Jabe Blumenthal and Julie Edsforth host in their “passive house” in the Madrona neighborhood.

Chef Rachel Yang of Joule, Revel, Trove, and most recently of Revelry in Portland, has been a finalist for James Beard’s Best Chef of the Northwest and has been featured on Iron Chef America.

Hilary Franz was elected Washington’s 14th Commissioner of Public Lands in November 2016. She is committed to protecting 5.6 million acres of state-owned forests, tidelands, and farmlands while ensuring they provide economic opportunity for surrounding communities. Chief Legal Counsel at the Bill & Melinda Gates Foundation, Connie Collingsworth leads the foundation’s legal team including grants and contracts in service to the foundation’s global missions.

Managing Director and co-founder of AJBR, Sheena Aebig and her husband, Eric Taylor, a radiation oncologist at Evergreen Health, welcome guests to their home in Leschi.

Born into a Syrian/Iranian family, Racha Barazi Haroun is the restaurateur behind Mamnoon, anar and mbar. She actively shines a positive light on a culture through food and other visceral experiences. King County Councilmember Kathy Lambert spent more than 15 years as an educator before taking to public office, first as a State Representative and now as a member of the King County Council where she is dedicated to reducing homelessness, protecting victims of domestic violence and improving public safety. Stranger Genius award winner, Barbara Earl Thomas is a Seattle-based artist, writer, and arts administrator.  She received the Mayor’s Arts Award in 2013 and the Artist Trust, Irving and Yvonne Twining Humber Award in 2016.

Chef David Glass is the head chef at How to Cook a Wolf, one of Ethan Stowell’s restaurants. A graduate of The Culinary Institute of America in Hyde Park, he has had stints at The Herbfarm, Cyrus in Healdsburg, Manresa in Los Gatos and spent time as the Sous Chef at ESR’s own Red Cow.

Ivor Horn, MD, MPH, is the Chief Medical Officer for Accolade.  She is a board-certified pediatrician, and was previously Medical Director of the Center for Diversity and Health Equity at Seattle Children’s Hospital. King County Councilmember Claudia Balducci is a mom, a neighborhood advocate, transportation leader and former public safety official now representing King County District 6.

Michael specializes in the technology of the common table, and the ability to shift culture through the use of thoughtful food and discourse-based gatherings. He is the founder of Deathoverdinner.org, creative agency Convivium , and seder.today.

Lindy West is a columnist at The Guardian, a contributor to This American Life, and a freelance writer whose work focuses on feminism, social justice, humor, and body image. Her first book, a memoir called Shrill, was released in 2016. G.Willow Wilson is a comics writer, essayist, and journalist. Her work includes Ms. Marvel, a comic series starring a 16-year-old Muslim shapeshifter superhero named Kamala Khan.

Valerie Curtis-Newton heads the MFA acting and directing programs at University of Washington.  She and wife Kim Powell invite you to join them in Kim’s metal working art studio in an industrial part of the Georgetown neighborhood.

Inspired by the indigenous dishes of Thailand, chefs P.K. and Wiley Frank of Little Uncle incorporate the essence of Thai street food and family-run shophouses into their menus.

Seattle cartoonist Ellen Forney, is the author of New York Times bestselling graphic memoir, Marbles: Mania, Depression, Michelangelo, and Me, is a Stranger Genius award winner in Literature, and the creator of the porcelain enamel on steel murals in the Capitol Hill light rail station. Sarah Wilke is the new Executive Director of SIFF, leading the annual Seattle International Film Festival, as well as year-round film programming in SIFF Cinema’s five screens throughout the city. She was the Managing Director of On the Boards, Seattle’s home for contemporary performance from 2004-2016.

Tabletop Game Designer Mike Elliott and his wife Fredrica, a mammographer for Swedish Ballard, welcome you to their Georgian-style home nestled along the north border of Discovery Park in Magnolia.

Jody Hall is the owner of Cupcake Royale, Seattle’s most celebrated collection of cupcake bakeries and cafes. In 2014 Jody founded The Goodship, a collective of bakers, makers, artists and believers in good who are pioneers in the wild west of legalized cannabis. H.E. Suzi LeVine just returned from serving as United States Ambassador to Switzerland and Liechtenstein. Among her many successes there, she expanded apprenticeship, jobs, and foreign direct investment into the US; helped prevent violent extremism; and advanced the dialogue around diversity of all types.

Chef Joshua Henderson is the founder and chef of the Huxley Wallace Restaurant Group, which includes such restaurants as Vestal, Great State Burger and Westward.

Claire Dederer is the author of the New York Times bestseller Poser; her new memoir Love and Trouble is coming from Knopf in May. She also writes for Vogue, The Atlantic, the New York Times, Slate, and many other publications. Suzanne Morrison is the author of Yoga Bitch, which was an Indiebound bestseller and has been translated into 6 languages. She teaches creative writing to women veterans throughout Washington state through the Red Badge Project.

Master Chef Nirmal Monteiro is the unassuming star chef of the highly acclaimed fine dining Indian restaurant, Nirmal’s, located in Pioneer Square. Nirmal’s International food and restaurant experiences span multiple countries including India, Italy, Guam, Iraq, Switzerland, and Japan. He has been recognized for his work the world over.

Curator, designer, and educator, Erika Dalya Massaquoi is the founder and CEO of The Oula Company, a Seattle-based contemporary womenswear brand that also offers accessories and home goods with a focus on global textile traditions, artisanal design, and economic development. As the co-founder of Theo Chocolate, Debra Music serves as the company’s Chief Sales and Marketing Officer. Debra’s experience as a strategic brand and cause-related marketing consultant has helped Theo become the fastest growing brand in its category.

President and CEO of Nyhus Communications, Roger Nyhus, opens his beautiful Capitol Hill home known as the White House. It was recently featured in Seattle Magazine as the “political powerhouse” of Seattle.

Representative Nicole Macri is a longtime resident of Capitol Hill with more than twenty years of experience championing progressive causes. Rep. Macri was elected to the Washington State House of Representatives in 2016 serving the 43rd Legislative District.

Managing Partner of Vault Capital and Founder of Dwehl LLC, Petra Franklin, welcomes guests to her pyramid home and (for the more adventurous…up to the globe) at the top of Seattle’s historic Smith Tower.

Osteria la Spiga’s Co-Founder & Executive Chef, Sabrina Tinsley’s passion for Northern Italian cuisine stems from the years she spent in the Emilia-Romagna region where her husband and la Spiga co-founder, Pietro, was born and raised. She uses fresh and seasonal ingredients to put her own spin on dishes that are authentic to this gastronomically celebrated region.

Eager to change how we think about women’s judgment, Therese Huston is the author of How Women Decide and a cognitive scientist at Seattle University.  Liz Vivian is President and CEO of Women’s Funding Alliance, an organization dedicated to advancing leadership and economic opportunity for women and girls in Washington State.

Distilled is a Town Hall cocktail party preceding the off-site Talk of the Town dinner parties. You can buy tickets for just this portion of the night for $50.

Town Hall is deeply grateful to our 2017 Talk of the Town sponsors: