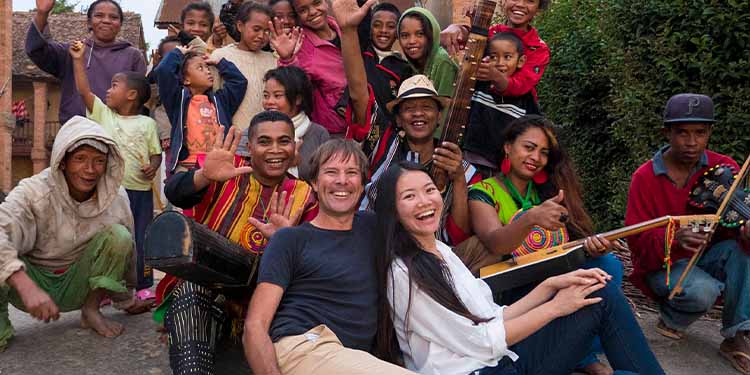 In partnership with the UW Taiwan Studies Arts & Culture Program, we are thrilled and honored to serve as the first stop on Small Island Big Song’s 2022 U.S. and European tour. We’ll also celebrate the release of their brand new collaborative album, Our Island (releasing in late January, 2022).

Eight musicians and vocalists from Taiwan, Australia, Madagascar, Mauritius, the Marshall Islands, and Papua New Guinea join us on the Great Hall stage for an extraordinary multimedia project of music, spoken word, and visuals. Despite the geographic distance of their islands, they share one unified voice of the sea; from oceanic grooves to soulful island ballads, the artists establish a musical dialogue from a region on the frontline of significant cultural and environmental challenges.

Over three years, Taiwanese producer BaoBao Chen and Australian music producer and filmmaker Tim Cole recorded and filmed over a hundred musicians, performing while surrounded by nature in their Pacific and Indian Ocean island homes across 16 countries. Today the work has resulted in an award-winning album, a feature film, outreach programs, and a live multimedia concert that tours the world.

Framed by a theatrical narrative, Small Island Big Song takes audiences on a musical journey into the soul of island nations of the Pacific and Indian Oceans. Performers and youth ambassadors share the voices of their islands, supported by cinematic sequences and panoramic visuals of their homelands. The result is a dialogue that honors their ancient seafaring ancestry while confronting the impacts of climate change head-on.

Small Island Big Song’s 2019 self-titled album was the winner of the 2019 German Record Critics’ Awards for Album of the Year, and from the U.K., the Songlines Music Awards 2019 for Best Asia/Pacific Album. The album was also nominated for the U.S. Independent Music Awards 2019 for Best Concept Album and Best Music Website, and was also chosen by Lauren Laverne as “Album of the week” on BBC Radio 6.