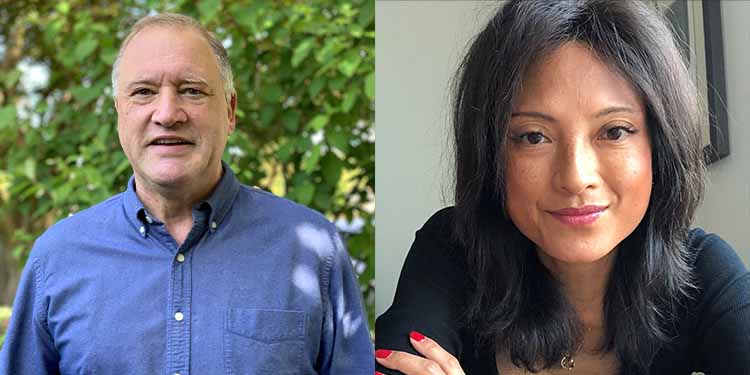 Alex Tizon (1959-2017) was a Pulitzer Prize-winning writer who built a career telling the stories of people at the margins. The underdogs. The forgotten ones. Everyday people. Immigrants, criminals, and folks on the fringe. Tizon believed that every human had a story to tell; they only needed to be invited to share it. In Invisible People: Stories of Lives at the Margins, Tizon’s friend and former colleague, Sam Howe Verhovek, brings his stories together in a deeply human collection of work.

Tizon had a knack for illuminating the stories of people typically hidden from view. From UFO-tracking outliers to immigrants from Cambodia and Laos, Verhovek brings such tales together to paint a rich and empathetic picture of humanity. Included is one of Tizon’s most important and controversial stories, which appeared on the cover of The Atlantic just months after his death in 2017. “My Family’s Slave” offers a painful and personal account of Eudocia “Lola” Tomas Polido, the enslaved woman who raised him and his siblings in the Philippines and later in America in the 1960s and 70s. Tizon’s exploration of personal ethics, family loyalty, human rights, and positions of power remain critical conversations to continue now, more than ever; Invisible People helps us keep them going.

Alex Tizon was an assistant professor of journalism at the University of Oregon. He served on The Seattle Times staff for 17 years and won the 1997 Pulitzer Prize for Investigative Reporting along with two colleagues. He was the second Philippine-born journalist to win a Pulitzer. He served as the Seattle bureau chief of the Los Angeles Times, contributed to Newsweek and 60 Minutes, and was a frequent contributor to The Atlantic. He was also the author of the award-winning memoir Big Little Man: In Search of My Asian Self.

Sam Howe Verhovek is a former national correspondent for The New York Times and the Los Angeles Times. He has been writing for newspapers since high school and was editor-in-chief of The Stanford Daily during his senior year of college. After graduation, he was hired by New York Times columnist and editor James Reston for a one-year “clerkship” to serve as Mr. Reston’s assistant in the Washington bureau. He also worked as a reporter for the Asahi Evening News in Tokyo and as a journalism teacher in Beijing before returning to The New York Times as a metro reporter in New York.

Melissa Tizon is the widow of late Pulitzer Prize-winning writer Alex Tizon. Trained as a journalist, Melissa is the vice president of national communication for Providence, one of the largest health systems in the U.S. She has lived in Seattle for more than 20 years.