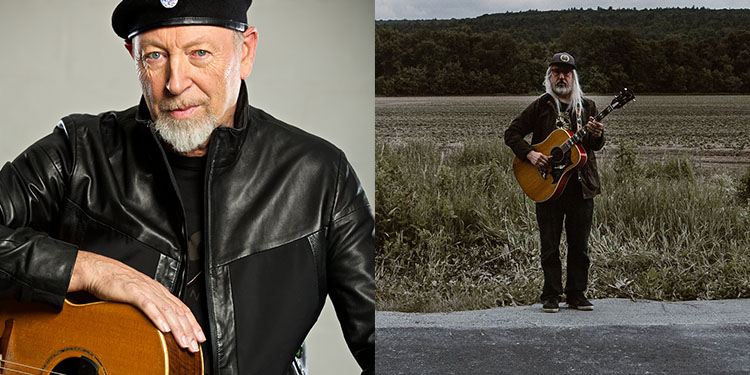 “The finest rock songwriter after Dylan.” “The best electric guitarist since Hendrix.” Who is this man? A man who packed more than a lifetime of experiences into his late teens and twenties? None other than international and longtime beloved music legend Richard Thompson.

The master of British folk music joins us via livestream with an intimate look at the early years of his career, encapsulated in his memoir Beeswing: Losing My Way and Finding My Voice 1967-1975. In this conversation with Dinosaur Jr.’s J Mascis, Thompson takes us on a moving journey through the pivotal years of 1967 to 1975, when he formed the band Fairport Convention with some schoolmates and helped establish the genre of British folk rock. The journey then takes us through a heady period of massive tours, where he crossed paths with the likes of Led Zeppelin, Pink Floyd, and Jimi Hendrix. But while there were some high highs, there were undoubtedly some low lows. The eight-year period was also marked by change, upheaval, and tragedy. Join us for a program featuring a short live performance* from Thompson and a conversation that vividly captures the life of a remarkable artist during a period of creative intensity, in a world on the cusp of change.

Richard Thompson‘s widely beloved early work within the band Fairport Convention revived British folk traditions, and his duet albums and performances with Linda Thompson are legendary. His songs have been covered by Elvis Costello, David Byrne, Bonnie Raitt, Emmylou Harris, and REM, among others. He continues to write and perform, and to tour widely. He lives in New Jersey.

J Mascis is a musician, producer, and film composer, best known as the frontman of the influential indie rock trio Dinosaur Jr. He started as a founding member of the hardcore band Deep Wound, until co-founding Dinosaur Jr. in 1984. In 1991, Dinosaur Jr. disbanded and Mascis released More Light, his first recording under the moniker J Mascis + The Fog. He often plays with other bands in addition to performing solo, and has been heavily involved behind the scenes producing and mixing records for highly regarded acts.

*Note that songs played live will be removed from the program before it is added to our Media Library.