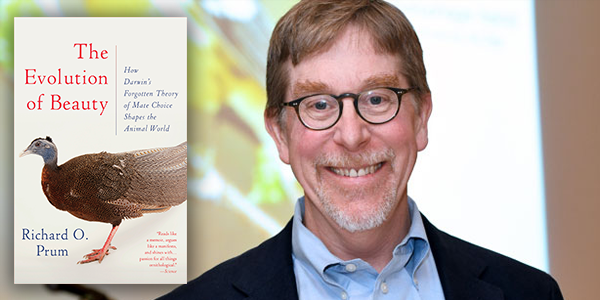 Deep in tropical jungles around the world are birds with a dizzying array of appearances and mating displays: Club-winged Manakins who sing with their wings, Great Argus Pheasants who dazzle prospective mates with a four-foot-wide cone of feathers covered in golden 3D spheres, Red-capped Manakins who moonwalk. In his thirty years of fieldwork, Yale University ornithologist Richard Prum has witnessed numerous such display traits that seem to contradict a classically upheld scientific dogma—that Darwin’s theory of natural selection explains every branch on the tree of life and accounts for the evolution of every trait we see in nature.

Prum joins us to share findings from his book The Evolution of Beauty and dusts off Darwin’s long-neglected theory of sexual selection, in which the act of choosing a mate purely for aesthetic and pleasurable reasons is an independent engine of evolutionary change. He explores how, according to Darwin, mate choice can drive the formation of traits that are ornamental rather than purely adapted for survival, and how the sexual autonomy of the female evolves in response to male sexual control. Prum shows us how this framework grants us insight even into the evolution of human sexuality—how female preferences have changed male bodies, and even maleness itself, through evolutionary time. Join Prum for a unique scientific vision of nature’s splendor that has the potential to contribute to a more complete understanding of evolution and of ourselves.

Richard O. Prum is William Robertson Coe Professor of Ornithology at Yale University, and Head Curator of Vertebrate Zoology at the Yale Peabody Museum of Natural History. He has conducted field work throughout the world, and has studied fossil theropod dinosaurs in China. He received a MacArthur Fellowship in 2010.

Presented by PATH and Town Hall Seattle as part of the Science series.