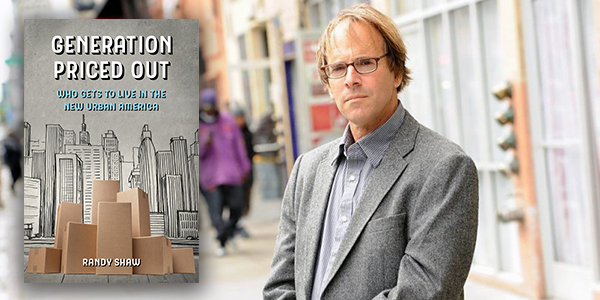 Many real estate experts around the country warn us that trends of skyrocketing rents and home values are pricing the working and middle classes out of urban America. Randy Shaw, Director of the Tenderloin Housing Clinic, comes to Town Hall’s stage with his perspective on the national housing crisis, and offers insight from his book Generation Priced Out: Who Gets to Live in the New Urban America. Shaw exposes how baby boomer homeowners restrict millennials’ access to housing in big cities and criticizes cities for advancing policies that increase economic and racial inequality. He meets with Seattle journalist and Evergrey co-founder Mónica Guzmán for a conversation about the factors faced by growing urban areas across the country. Shaw asserts that neighborhood gentrification is not inevitable and presents proven measures for cities to preserve and expand their working- and middle-class populations and achieve more equitable and inclusive outcomes. Join Shaw and Guzmán for an urgent conversation about reforming the places we live and building an equitable future for urban America.

Randy Shaw is the Director of the Tenderloin Housing Clinic, San Francisco’s leading provider of housing for homeless single adults. His previous books include The Activist’s Handbook: Winning Social Change in the 21st Century and The Tenderloin: Sex, Crime and Resistance in the Heart of San Francisco.

Mónica Guzmán is a Seattle journalist and co-founder of The Evergrey. Her work has appeared in numerous publications, including GeekWire, The Daily Beast, the Columbia Journalism Review, and The Seattle Times.