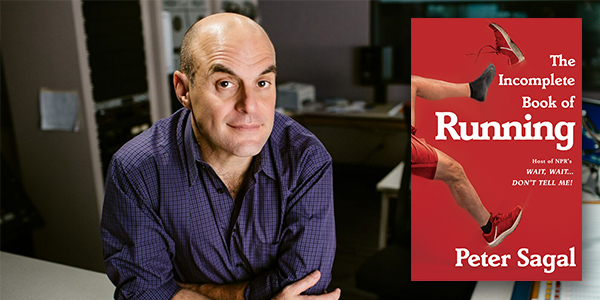 This event is sold out. There will be a standby line at the door.

At the verge of turning forty, Peter Sagal—host of NPR’s “Wait Wait… Don’t Tell Me!”—started running seriously. And much to his own surprise, he kept going, faster and further, running fourteen marathons and logging tens of thousands of miles on roads, sidewalks, and paths all over the United States and the world. Now his feet have carried him to Town Hall’s stage to reflect on the trails, tracks, and routes he’s traveled with recollections from his book The Incomplete Book of Running.

He shares stories of running charity races in his underwear, attempting to “quiet his colon” on runs around his neighborhood, and the experience of running as a guide to visually impaired runners. With humor and humanity, he connects his emotional experience of running to discussions of body image and the similarities between endurance sports and sadomasochism. Join Sagal for a funny, wise, and powerful meditation about running—and about life.

Peter Sagal is the host of the Peabody Award-winning NPR news quiz “Wait Wait…Don’t Tell Me!”, the most popular show on public radio, heard by five million listeners each week. He is also a playwright, a screenwriter, the host of “Constitution USA with Peter Sagal” on PBS, a one-time extra in a Michael Jackson music video, a contributor to publications from Opera News to The Magazine of the AARP and a featured columnist in Runner’s World. He’s run fourteen marathons across the United States.

Ross Reynolds is executive producer for Community Engagement. His projects include the person to person conversation event ‘Ask A…’ and That’s Debatable: Amazon is Good for Seattle. Prior to his current job Ross hosted “The Record” (2014-2015) and “The Conversation,” KUOW’s award winning daily news talk program (2000 – 2014). Ross came to KUOW in 1987 as news director and in 1992 became program director. As program director, he changed the station’s format from classical/news to news and yet more news.

Town Hall’s tickets are just $5 to ensure that cost is never a barrier to entry—but for low-income members of our community, even $5 can be a challenge. That’s why we’re asking you to “pay what you can” for tickets to this event.

Every time you pay more than our suggested price of $5 for a ticket, you‘re helping us further underwrite admission for those in need. Thank you!