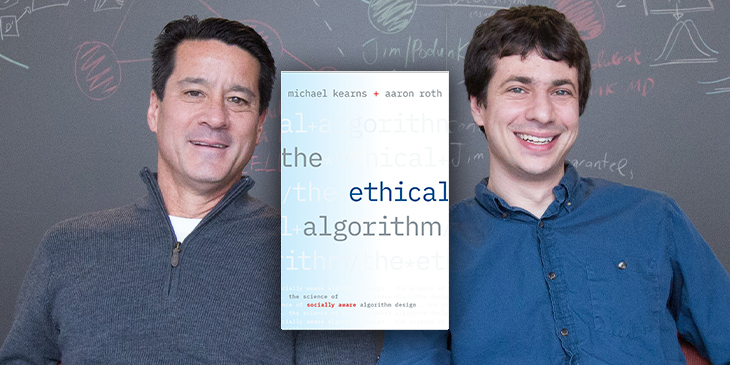 Over the course of a generation, algorithms have gone from mathematical abstractions to powerful mediators of daily life. Algorithms have made our lives more efficient, but some experts contend that they are increasingly violating the basic rights of individual citizens. Professors Michael Kearns and Aaron Roth delve into the complexities of this topic with insight from their book The Ethical Algorithm. Joined by moderator Eric Horvitz of Microsoft Research Labs, Kearns and Roth contend that understanding and improving the science behind the algorithms that run our lives is rapidly becoming one of the most pressing issues of this century, yet traditional fixes such as laws, regulations, and watchdog groups have proven woefully inadequate.

With reporting from the cutting edge of scientific research, Kearns and Roth offer a set of principled solutions based on the emerging and exciting science of socially aware algorithm design. They explore the future of responsible algorithm design. with strategies for combating data leaks and eliminating models with racial and gender biases. Kearns, Roth, and Horvitz invite us to a conversation about how we can better embed human principles into machine code—without halting the advance of data-driven scientific exploration.

Michael Kearns is Professor and the National Center Chair in the Computer and Information Science department of the University of Pennsylvania. He is also the Founding Director of Penn’s Warren Center for Network and Data Sciences. Together with U.V. Vazirani, he is the author of An Introduction to Computational Learning Theory.

Aaron Roth is the class of 1940 Bicentennial Term Associate Professor in the Computer and Information Science department at the University of Pennsylvania, where he co-directs Penn’s program in Networked and Social Systems Engineering. Together with Cynthia Dwork, he is the author of The Algorithmic Foundations of Differential Privacy.

Eric Horvitz is Technical Fellow and Director at Microsoft Research Labs. He works to pursue research on principles of machine intelligence and on leveraging the complementarities of human and machine reasoning. He chairs the Aether Committee, Microsoft’s advisory board on the responsible fielding of AI technologies. He co-founded the Partnership on AI, a multiparty stakeholder organization that brings together leading tech companies and civil society groups on best practices with uses of AI in the open world.