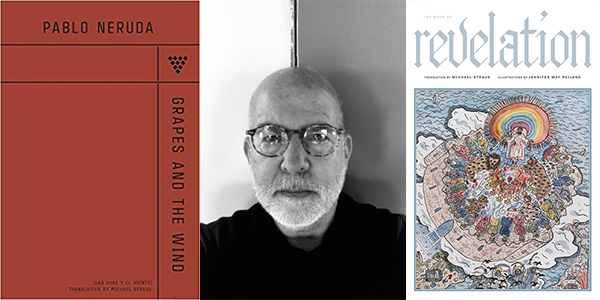 There are thousands of living languages spoken in the world—and countless literary masterworks written in each of those languages. Translators like Michael Straus offer us a gateway to these incredible works of fiction and literary history. Straus joins us onstage to discuss the process and philosophy of translation, as explored in two of his most recently translated books—Grapes and the Wind by Pablo Neruda, and a richly illustrated edition of the Bible’s Book of Revelation. Straus cross-references these two incredibly different works, along with their notably distinct formats, and outlines his experiences engaging with both texts. Sit in with Straus for a compelling look into a mind that lives between languages, and learn what it means to act as a conduit for the restructuring of a powerful piece of literature.

Michael Straus is a translator who is intermittently engaged with translations from Greek as well as Spanish. He is also actively involved in the work of various museums and artist foundations.

Claudia Castro Luna is Washington State Poet Laureate. She served as Seattle’s Civic Poet from 2015 to 2017.