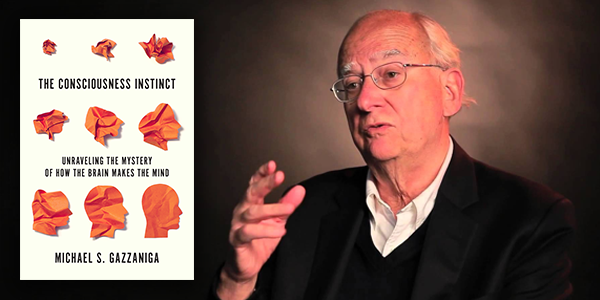 This event is sold out. There will be a standby line at the door. Read more about standby here.

The problem of consciousness has gnawed at us for millennia. How do neurons turn into minds? How does physical “stuff”―atoms, molecules, chemicals, and cells―create the vivid and various worlds inside our heads? In the last century there have been massive breakthroughs that have rewritten the science of the brain, and yet the puzzles faced by the ancient Greeks still perplex scientists to this day. To help us solve these puzzles, neuroscience pioneer Michael S. Gazzaniga brings us the latest research in the conversation about the human mind, compiled in his book The Consciousness Instinct: Unraveling the Mystery of How the Brain Makes the Mind.

Gazzaniga is joined by onstage interviewer Bill Radke, KUOW’s host of The Record. Together the two present us with a big-picture view of scientific revelations about consciousness, and question the centuries-old idea of the brain as a machine. Gazzaniga asserts that this model has it backward―brains make machines, but they cannot be reduced to one—and shares new research that suggests the brain is actually a confederation of independent modules working together. Join Gazzaniga and Radke us for an illuminating discussion that will help define the future of brain science and artificial intelligence, and close the gap between brain and mind.

Michael Gazzaniga is the director of the SAGE Center for the Study of the Mind at the University of California, Santa Barbara. He is the president of the Cognitive Neuroscience Institute, the founding director of the MacArthur Foundation’s Law and Neuroscience Project, and a member of the American Academy of Arts and Sciences, the National Academy of Medicine, and the National Academy of Sciences. He is the author of many popular science books, including Who’s In Charge?: Free Will and the Science of the Brain, Tales from Both Sides of the Brain, and Human: The Science Behind What Makes Us Unique.

Bill Radke is the host of The Record and Week In Review on KUOW. He has been a host on American Public Media’s Weekend America and Marketplace Morning Report, and is the creator of past show Rewind, a news-satire show heard on KUOW and nationwide on NPR.

Presented by Town Hall Seattle and PATH as part of the Science series.

The views and opinions expressed by speakers are entirely their own. PATH nor Town Hall Seattle take no position on event content.