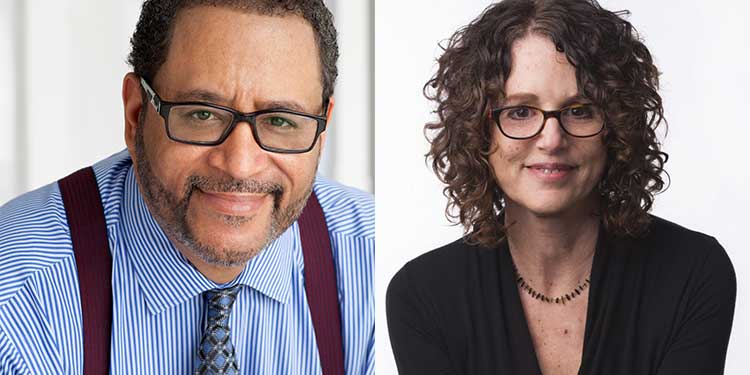 The night of May 25, 2020 changed America. George Floyd, a 46-year-old Black man, was killed during an arrest in Minneapolis when a white cop suffocated him. The video of that night’s events went viral, sparking the largest protests in the nation’s history and the sort of social unrest we have not seen since the sixties. While Floyd’s death was certainly the catalyst, many believe it was the fuse that lit a powder keg that has been filling since America’s promising but perilous beginning.

Now, public intellectual Michael Eric Dyson joins us via livestream in conversation with academic and author Robin DiAngelo with a necessary discussion that grapples with the cultural and social forces that have shaped our nation in the brutal crucible of race. Drawing on his book Long Time Coming: Reckoning with Race in America, Dyson examines the cultural imperatives of Black death, the plague of police brutality, the white theft of Black bodies and opportunities, and the craving for white comfort that has too often cost Black people their lives. He traces the genealogy of anti-Blackness from the slave ship to the street corner where Floyd lost his life—and where America gained its will to confront the ugly truth of systemic racism. With an urgent guide to help America finally reckon with race, Dyson presents a poignant plea for hope, and points the way to social redemption.

Michael Eric Dyson is one of America’s premier public intellectuals and the author of seven New York Times bestsellers. He is a Distinguished University Professor of African American and Diaspora Studies and of Ethics and Society at Vanderbilt University, where he is also Centennial Professor. A contributing opinion writer for The New York Times, Dr. Dyson is a recipient of two NAACP Image Awards, and the 2020 Langston Hughes Festival Medallion.

Robin DiAngelo is an academic, lecturer, and author, and has been a consultant and trainer on issues of racial and social justice for more than twenty years. She formerly served as a tenured professor of multicultural education at Westfield State University. She is the author of the bestselling book White Fragility: Why It’s So Hard for White People to Talk About Racism.

Presented by Town Hall and Sponsored by The Boeing Company.