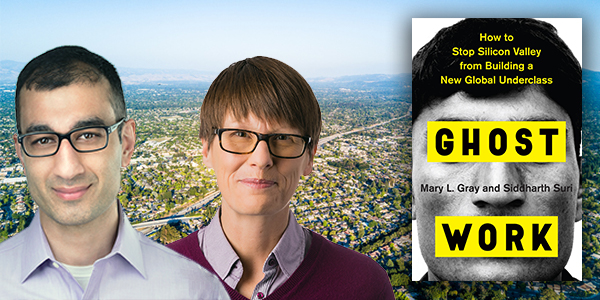 Hidden beneath the surface of the web, there is an unseen workforce of proofreaders, designers, and content watchdogs who make the internet seem smart. Co-authors Mary Gray and Siddharth Suri take the stage, joined by GeekWire’s Molly Brown, to shine a light on these laborers in Ghost Work: How to Stop Silicon Valley from Building a New Global Underclass. They assert that companies like Amazon, Google, Microsoft, and Uber depend on the judgment and experience of this vast, invisible human labor force—yet despite their necessity, these workers usually earn less than minimum wage, have no health benefits, and can be fired at any time for any reason, or none. Gray and Suri introduce us to the people who make up these latter-day assembly lines: harried young mothers, professionals forced into early retirement, recent grads who can’t get a toehold on the traditional employment ladder, and minorities shut out of the jobs they want. Join Gray, Suri, and Brown for an exposition on “ghost work,” and a discussion on the ways we can ensure that this new kind of work creates opportunity—rather than misery—for those who do it.

Mary Gray is a Fellow at Harvard University’s Berkman Klein Center for Internet and Society and Senior Researcher at Microsoft Research. Her research looks at how technology access, material conditions, and everyday uses of technologies transform people’s lives. Mary is one of the world’s experts in the emerging field of AI and ethics, particularly research methods at the intersections of computer and social sciences.

Siddharth Suri is a Senior Researcher at Microsoft Research, and a computational social scientist whose research interests lie at the intersection of computer science, behavioral economics, and crowdsourcing. His early work analyzed the relationship between network topology and human behavior.

Molly Brown is a freelance writer and editor covering tech, travel, books, and more. Her work is featured with GeekWire, The New York Times, Business Insider, NPR, Cambridge News, and others.