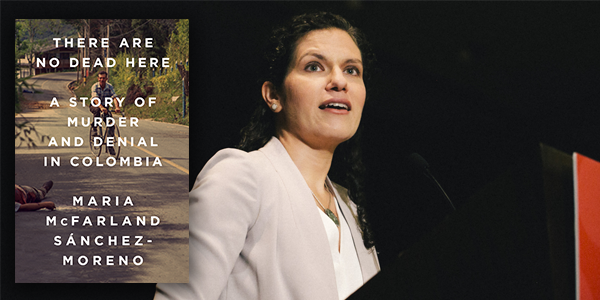 Starting in the late 1990s, paramilitary groups with close ties to drug cartels carried out a bloody expansion campaign throughout much of Colombia. Maria McFarland Sánchez-Moreno joins us with insight from her book There Are No Dead Here: A Story of Murder and Denial in Colombia, sharing her account of massacres committed by paramilitary groups fueled by drug profits all in the name of defending the country from brutal Marxist guerrillas. She joins us to discuss details of grievous humanitarian abuses against thousands, committed with the complicity of much of Colombia’s military and political establishment—and outlines how the United States, more interested in the appearance of success in its “war on drugs” than in stopping the carnage, largely ignored them even as it poured billions of dollars into Colombia’s military.

Drawing on hundreds of hours of interviews and five years on the ground in Colombia, McFarland Sánchez-Moreno takes our stage to share three interconnected stories Colombians bound by their commitment to the truth—journalists and investigators who sent prophetic warnings of military complicity, spread groundbreaking revelations of congressional conspiracy, and published truths undermining a corrupt president’s propaganda. In a sobering yet urgent discussion of a nation’s institutionalized abuse of power, McFarland Sánchez-Moreno gives her account of the brutality and corruption that swept like a lethal virus through Columbia’s society and political system—and the slow but inexorable ways the country is breaking free from the paramilitaries’ grip.

Presented by Town Hall Seattle and Phinney Neighborhood Association as part of the Civics series.