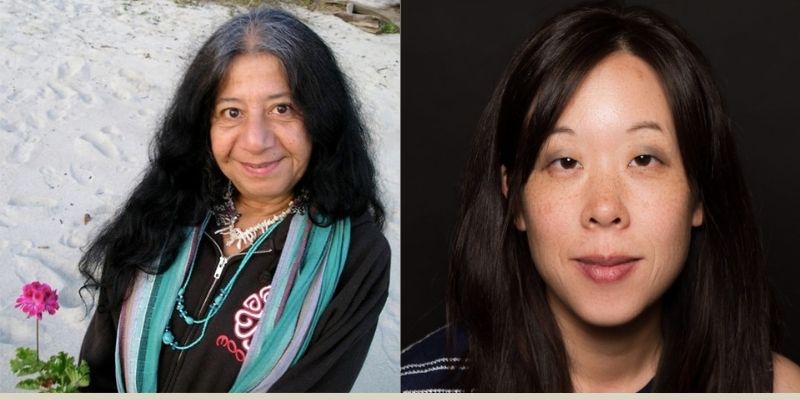 Poet Lorna Dee Cervantes is considered one of the major voices in contemporary Chicana literature. Growing up, she was encouraged to only speak English in order to avoid racism in her California community. As a writer, her experiences as a woman of Mexican and Indigenous American descent fuel her work, which often explores loss of language, questions of identity, and dichotomies of acceptance and resistance.

In this installment of Lyric World for Town Hall’s In the Moment podcast, Program Director Shin Yu Pai interviews Cervantes about her newest collection of poetry, April on Olympia.

Lorna Dee Cervantes is a XicanIndx (Chumash/Purepacha) author of five award-winning books of poetry: Emplumada (Pitt Poetry Series 1981); From the Cables of Genocide: Poems on Love and Hunger (Arte Publico Press 1991); Ciento: 100 100-Word Love Poems (Wings Press 2011); Drive: The First Quartet (Wings Press 2005); and Sueño (Wings Press 2013). The founder of MANGO Publications (first to publish Sandra Cisneros), Cervantes is also the recipient of two NEA grants, two Pushcart Prizes, a Lila Wallace Readers Digest grant, and three state arts poetry fellowships. She presented twice at the Library of Congress as well as hundreds of universities, colleges, and other venues. The former Director of Creative Writing at CU Boulder, where she was a professor for 20 years, she moved to Olympia, WA in 2014 and now lives and writes in Seattle.

Shin Yu Pai is Program Director for Town Hall. She is the author of eleven books of poetry. From 2015 to 2017, she served as the fourth poet laureate of the City of Redmond. Her work has appeared in publications throughout the U.S., Japan, China, Taiwan, the United Kingdom, and Canada.