Lori Gottlieb and Luke Burbank
Maybe You Should Talk to Someone 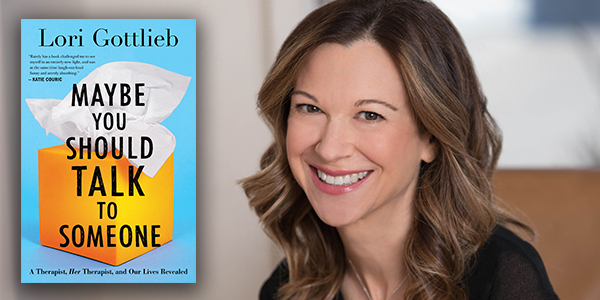 What happens when a professional therapist needs to seek council of her own? Lori Gottlieb, Los Angeles therapist and writer of the Atlantic column “Dear Therapist,” found herself in exactly this predicament. She joins us to discuss her book Maybe You Should Talk to Someone, a candid and humorous account of her experiences that pulls back the curtain on the therapeutic process.

Gottlieb meets onstage with Luke Burbank, host of Portland Radio’s Live Wire. Together the two delve into the parallels between Gottlieb’s own practice, both therapeutic and journalistic, and her experiences talking with a therapist of her own. They explore the stories of Gottlieb’s patients—a self-absorbed Hollywood producer, a young newlywed diagnosed with a terminal illness, a senior citizen threatening to end her life on her birthday if nothing gets better, and a twenty-something who can’t stop hooking up with the wrong guys—highlighting how the questions they struggle with are the very same that Gottlieb found herself bringing to her own sessions.

Join Gottlieb and Burbank for an entertaining, illuminating, and quite possibly life-changing account of our own mysterious lives and our power to transform them.

Lori Gottlieb is a psychotherapist and New York Times bestselling author who writes the weekly “Dear Therapist” advice column for the Atlantic. A contributing editor for the Atlantic, she also writes for The New York Times Magazine, and is a sought-after expert on relationships, parenting, and hot-button mental health topics in media such as The Today Show, Good Morning America, CBS This Morning, Dr. Phil, CNN, and NPR.

Luke Burbank is a stand-up comic, former NPR host and former producer. In addition to being the lead voice of Portland Radio’s Live Wire, he continues to host his highly successful podcast, Too Beautiful to Live. Burbank has served as a host for NPR’s Wait Wait…Don’t Tell Me! and The Bryant Park Project, and has appeared on This American Life, All Things Considered, and Morning Edition.

Note: Dan Savage was originally scheduled to be part of this program. Due to unexpected, conflicting travel plans he will no longer be able to participate.