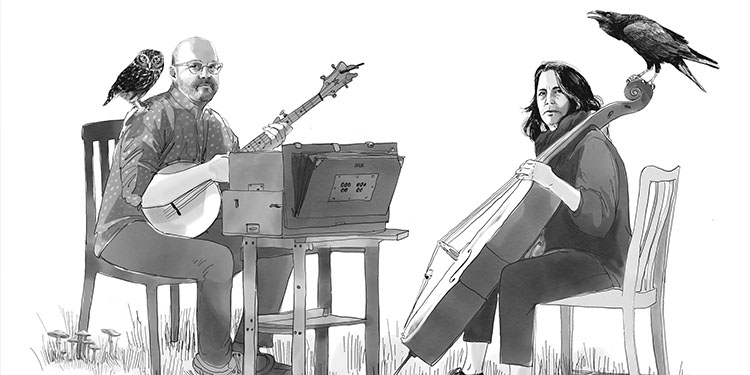 United by a mutual love of very old folk songs, cellist Lori Goldston and singer Jordan O’Jordan join us to celebrate the release of their LP, Very Old Songs. Very Old Songs marks the launch of Goldston’s new label, Woodland Fauna, and celebrates the beauty, resilience, and earthly magic of traditional music. They take on traditional British and Appalachian ballads with austere and exquisite arrangements. The duo uses cello, banjo, harmonium, and voice to create rich soundscapes that allow each ancient song to transport the listener. Don’t miss this festive presentation which will include premieres of music videos and performances by Goldston and O’Jordan along with guests Phil Elverum, Tomo Nakayama, Clyde Petersen, and J.R. Rhodes.

A portion of the ticket price for this program will be split to benefit the White Center Food Bank and Central Texas Food Bank.

Jordan O’Jordan is a fifth generation Appalachian, from Pike County, Ohio. He has spent the last 15 years as a queer troubadour, banjo-player, singer, and scientist–touring worldwide as a solo musician or as part of the folk trio Polka Dot Dot Dot. He has released 6 full length records, two EPs, and one children’s book (Mountain Lullaby, in collaboration with the UK’s We Heart Arts Nonprofit). His art and science work has been featured in the New York Times and on National Radio New Zealand.