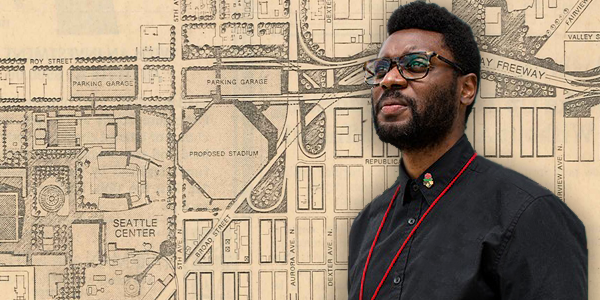 This event is part of a series of community conversations hosted by Shaun Scott centering on ideas and possibilities put forward by Forward Thrust in the late 1960’s.

What would Seattle look like today if we had voted for mass transit nearly 50 years ago? In this public discussion forum (the final event of four!), Seattle-based author and social historian Shaun Scott assembles Seattle locals to re-examine the Forward Thrust Committee’s work to catapult our city into the future. Forward Thrust was a movement from 1968 to 1970 that proposed several ballot initiatives to renovate and rejuvenate Seattle with public parks, professional sports stadiums, and a new environmental awareness—though they famously did not succeed in securing an expansive subway system for the city.

Shaun Scott is a Seattle-based writer and historian whose reflections on race, cinema and American spectacle have appeared in The Monarch Review and New Worker Magazine. He’s a featured contributor to City Arts Magazine, where he writes the thread “Faded Signs,” a semi-weekly column about cultural life under late capitalism. He is the author of the e-book Something Better: Millennials and Late Capitalism at the Movies.