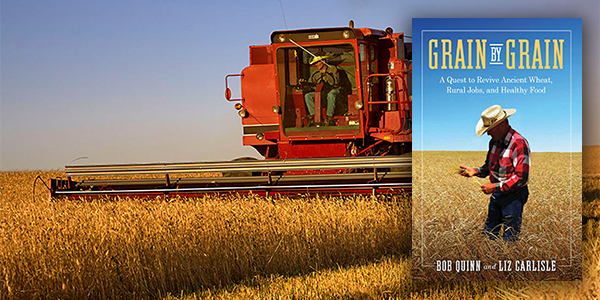 When Bob Quinn was a kid, a stranger at a county fair gave him a few kernels of an unusual grain. Little did he know, that grain would change his life. Over the years, he began experimenting with organic wheat and he began to discover that through time-tested practices like cover cropping and crop rotation, he could produce successful yields—without pesticides. Quinn joins us on Town Hall’s stage along with co-author Liz Carlisle for a look into their latest book Grain by Grain.

Quinn and Carlisle share details from these groundbreaking forays with organics, which have since turned into a multimillion dollar heirloom grain company, Kamut International. Sit in for a conversation about the new story of American agriculture—plus some delicious ancient grain snacks for the audience to enjoy—and an exploration of a model that could revitalize stagnating rural communities, enrich degraded soil, and build a new sustainable healthy future grain by grain.

Bob Quinn is an organic farmer near Big Sandy, Montana, and a leading green businessman. He served on the first National Organic Standards Board, and has been recognized with the Montana Organic Association Lifetime of Service Award, The Organic Trade Association Organic Leadership Award, and Rodale Institute’s Organic Pioneer Award. His enterprises include the ancient grain business Kamut International and Montana’s first wind farm.

Liz Carlisle is a Lecturer in the School of Earth, Energy, and Environmental Sciences at Stanford University. Her first book, Lentil Underground, won the Montana Book Award and the Green Prize for Sustainable Literature.