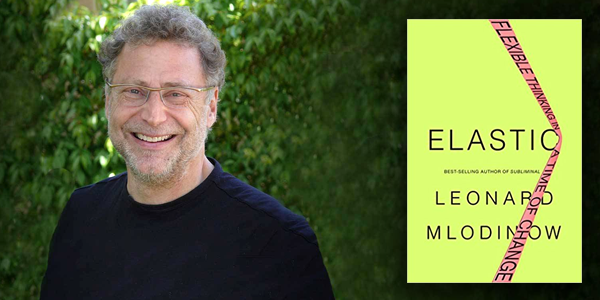 With rapid technological innovation leading the charge, today’s world is transforming itself at an extraordinary and unprecedented pace. We are confronted every day with new challenges as jobs become more multifaceted, information streams multiply, and myriad devices place increasing demands on our attention. Theoretical physicist Leonard Mlodinow joins us with insight from his book Elastic: Flexible Thinking in a Time of Change, drawing on cutting-edge research in neuroscience and psychology to illuminate ways in which the human brain is uniquely engineered to adapt. Mlodinow takes the stage for a look at the mechanics of our own minds as we navigate the rapidly shifting landscapes around us.

Out of the exploratory instincts that allowed our ancestors to prosper hundreds of thousands of years ago, humans developed a cognitive style that Mlodinow terms elastic thinking, a collection of traits and abilities that include neophilia (an affinity for novelty), schizotypy (a tendency toward unusual perception), imagination and idea generation, pattern recognition, mental fluency, divergent thinking, and integrative thinking. Mlodinow asserts that these are the qualities that will enable each of us to succeed, personally and professionally, in the radically changing environments of today. With his keen acumen and rapid-fire wit, Mlodinow gives us the essential tools to harness the power of elastic thinking in an endlessly dynamic world.

Leonard Mlodinow received his Ph.D. in theoretical physics from the University of California, Berkeley, was an Alexander von Humboldt Fellow at the Max Planck Institute, and was on the faculty of the California Institute of Technology. His previous books include the bestsellers Subliminal (winner of the PEN/E. O. Wilson Literary Science Writing Award), War of the Worldviews (with Deepak Chopra), The Grand Design (with Stephen Hawking), and The Drunkard’s Walk: How Randomness Rules Our Lives (a New York Times Notable Book), as well as The Upright Thinkers, Feynman’s Rainbow, and Euclid’s Window. He also wrote for the television series “MacGyver” and “Star Trek: The Next Generation.”

Jane C. Hu is a Seattle-based science journalist whose writing has appeared in publications like Slate (where she was a AAAS Mass Media Fellow in 2014), TheAtlantic.com, Scientific American, NBC News, Outside, and Science. She performed science outreach for the University of Washington’s Institute for Learning & Brain Sciences, and was a 2016 Early Career Fellow at The Open Notebook.

Presented by Town Hall Seattle as part of the Science series.