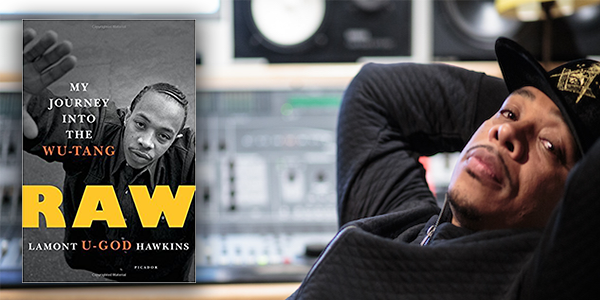 Many music fans consider the Wu-Tang Clan to be hip-hop royalty. But remarkably, none of the founding members have told their story. Town Hall is excited to partner with 206 Zulu to present Raw: My Journey into the Wu-Tang, a history of this seminal hip-hop group by Lamont “U-God” Hawkins, one of the group’s founding members. U-God charts the group’s origins—how, brought up by the streets and bonding over their love of hip-hop, they sought to pursue the impossible: music as their ticket out of the ghetto.

U-God is joined onstage by Dr. Daudi Abe, Seattle-based professor and historian who has written about race, culture, and hip-hop for over 20 years. Dr. Abe interviews U-God as he recounts stories of how he met and befriended those who would eventually form the Clan’s core: RZA, GZA, Method Man, Raekwon, Ol’ Dirty Bastard, Inspectah Deck, Ghostface Killah, and Masta Killa. Join U-God and Dr. Abe for an evening of hip-hop revelations as U-God shares his journey from the streets of Brooklyn to some of the biggest stages around the world, and captures in vivid detail the making of one of the most influential music acts in American music history.

Born Lamont Jody Hawkins, U-God is an American rapper and hip-hop artist and one of the founding members of the legendary Wu-Tang Clan. A native New Yorker, Raw is his first book.

Dr. Daudi Abe is a Seattle-based professor, writer, and historian who has taught and written about culture, race, gender, education, communication, hip-hop, and sports for over 20 years. His work has been published in The Stranger, Crosscut, and The Seattle Times; and he has appeared on national media such as MSNBC and The Tavis Smiley Show. His forthcoming book is Emerald Street: A History of Hip-Hop in Seattle.

Presented by Town Hall Seattle and 206 Zulu as part of the Arts & Culture series.