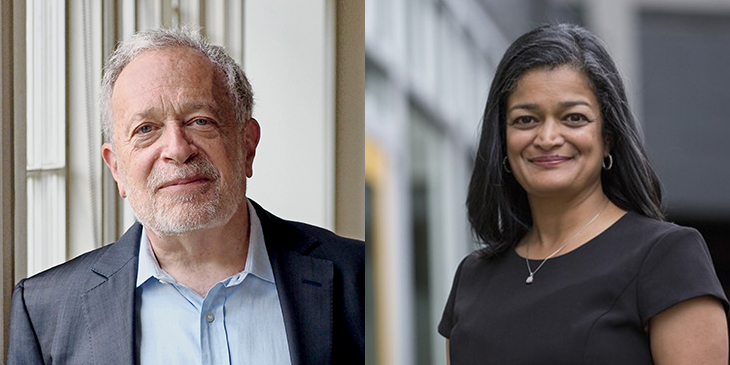 What steps can we take in order to better our country by protecting the common interest of our workers? Former U.S. Secretary of Labor Robert Reich arrives at Town Hall along with Washington’s 7th District Representative Pramila Jayapal for a Labor Day exploration of Reich’s latest book The Common Good. They offer their perspective on the state of American politics and the labor movement, and unpack Reich’s powerful case for the expansion of America’s moral imagination. Rooting his argument in common sense and everyday reality, Reich demonstrates that a common good constitutes the very essence of any society or nation. Societies, he says, undergo virtuous cycles that reinforce the common good as well as vicious cycles that undermine it—one of which America has been experiencing for the past five decades. This process, Reich asserts, can and must be reversed. Join Reich and Jayapal for a chance to weigh the moral obligations of citizenship and carefully consider how we relate to labor, honor, shame, patriotism, truth, and the meaning of leadership.

Robert B. Reich is Chancellor’s Professor of Public Policy at the University of California at Berkeley and Senior Fellow at the Blum Center for Developing Economies. He served as Secretary of Labor in the Clinton administration, for which Time Magazine named him one of the ten most effective cabinet secretaries of the twentieth century. He has written fifteen books, including the bestsellers Aftershock, The Work of Nations, and Beyond Outrage.

Congresswoman Pramila Jayapal represents Washington’s 7th District, which encompasses most of Seattle and surrounding areas including Shoreline, Vashon Island, Lake Forest Park, Edmonds and parts of Burien and Normandy Park. Congresswoman Jayapal is committed to ensuring that every resident of the district has economic opportunity; fairness and equity; and safe and healthy communities.