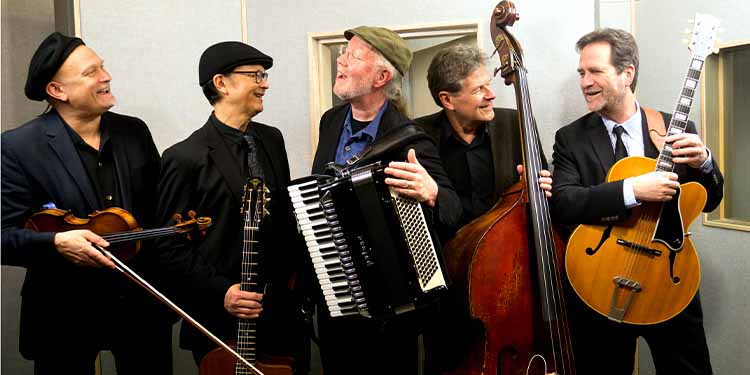 The free event is at 7 p.m. Doors open at 6 p.m. Attend in person or watch online at knkx.org.

With a performance history spanning more than 27 years and having released 15 albums, Pearl Django endures as one of the most highly regarded Hot Club style groups working today. Although the band’s roots are firmly established in the music made famous by Django Reinhardt and Stephane Grappelli, its extensive repertoire includes traditional jazz classics and original compositions. Pearl Django has performed at festivals, dances and nightspots throughout the U.S. and abroad. They have played at the prestigious Festival Django Reinhardt in Samois sur Seine and have been featured on NPR’s All Things Considered. In 2018, Pearl Django received the Earshot Golden Ear Award for Northwest Acoustic Jazz Ensemble. The band’s signature style is marked by pristine and dexterous string work, colors of Bal Musette, the steady pulse of rhythm guitar, and an unmistakable swing that delights audiences of all musical sensibilities. Throughout the years, Pearl Django has cultivated a devoted and enthusiastic following and they continue to play to packed houses wherever they perform.

Gail Pettis’s singing has been described by JazzTimes as “…a retro air that hints at the silken sophistication and storytelling elan of the young Nancy Wilson.” In addition to performing in the Northwest and nationally, Gail has been an artist-in-residence at the Amersfoort Jazz Festival in the Netherlands, a guest artist at the Seattle-Kobe Female Jazz Vocalist Audition in Kobe, Japan, and a performer at the White Nights Jazz Festival in Russia. Gail’s debut album, May I Come In? was nominated for an Earshot Golden Ear Award. Her sophomore album, Here in the Moment, featured refreshing readings of standard songs and was the most-played new female vocal CD on American jazz radio in 2010. She was named Northwest Vocalist of the Year by Earshot Jazz in 2007 and 2010.

Seattle JazzED was created in 2010 with a mission to ensure that students across the region had access to the life-transforming opportunities of music education. The program welcomes students in grades 4-12 at all levels. Some of Seattle JazzED’s one-of-a-kind programs include: The New Works Ensemble directed by composer Wayne Horvitz; the Girls Ellington Project, Seattle’s premiere all-city girls’ jazz band; and the Summer Jazz Ambassadors, a tour-de-force ensemble with training in performance skills and mentoring. For the first time ever, a Seattle JazzED ensemble was selected as a finalist in the 2021 Essentially Ellington High School Jazz Competition presented by Jazz at Lincoln Center. Seattle JazzED is building its permanent building in Seattle’s Rainier Valley in partnership with an affordable housing organization. With over 18,000 square feet of rehearsal space, performance space, community space and a café, the building will include five floors of affordable housing.