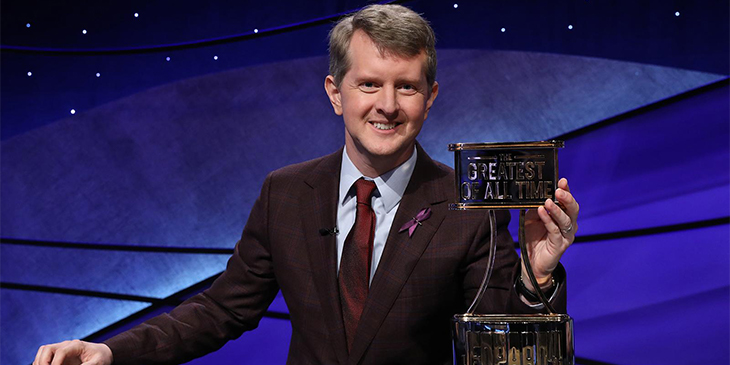 On January 7, 2020, 15+ years since the end of his astonishing run of 74 consecutive wins on the game show Jeopardy, Ken Jennings officially joined the pantheon of Seattle champions. At the show’s Greatest of All Time Tournament, he took the crown in a nail-biter, besting both the record holder for single day earnings James Holzhauer and the all-time-earnings-leader (and his own personal bete noir) Brad Rutter.

At the Victory Party, play along and relive the drama through start/stop video commentary from Ken himself, in conversation with friends Maria Semple (best-selling author of Where’d You Go, Bernadette?) and John Roderick (singer/songwriter of The Long Winters). As we roll the tape on Ken’s 30 minutes of glory, we’ll take a journey deep inside the mind (and experience) of a champion.

Ken Jennings is an author, programmer, contestant, bon vivant, Undisputed G.O.A.T. champion, and author. He holds the record for longest winning streak on Jeopardy! with 74 wins. Jennings wrote about his experience and explored American trivia history and culture in his book Brainiac: Adventures in the Curious, Competitive, Compulsive World of Trivia Buffs. He is also the author of Because I Said So!: The Truth Behind the Myths, Tales, and Warnings Every Generation Passes Down to Its Kids.

John Roderick is the songwriter and singer/guitarist of the band The Long Winters. Widely acclaimed as one of America’s preeminent artists, credited with resurrecting Seattle’s moribund music scene and bringing new life to the rock genre, John also writes his own press bios.