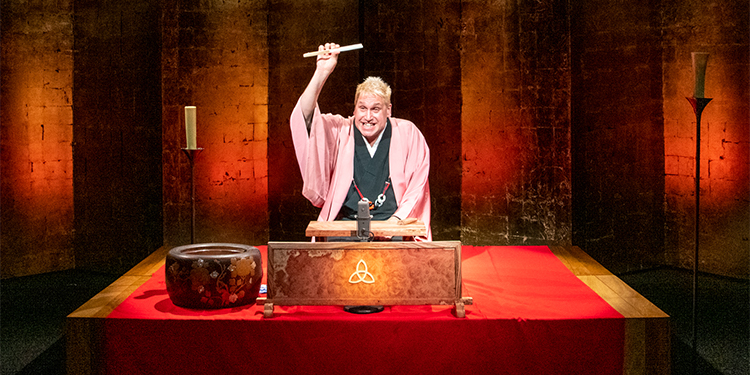 Donations made during this event will go to the UW’s Washin Kai — Friends of Classical Japanese Fund to support the classical Japanese literature studies at University of Washington. Donations can also be made directly to the Fund here.

Described as “a sitcom with one person playing all the parts,” the 400-year-old tradition of rakugo storytelling requires a very strict and arduous apprenticeship to learn. The stories have been passed down from master to apprentice aurally throughout the centuries. Join Katsura Sunshine as he performs what he has learned as a rakugo storyteller—the only non-Japanese rakugo storyteller in the world.

Washin Kai and Town Hall welcome Sunshine performing via livestream from Japan. He shares two rakugo stories of everyday life, drawing from his smash-hit Off-Broadway show Rakugo (currently on hiatus due to the pandemic). Sunshine is joined by University of Washington professor Paul Atkins, who shares a bit more the tradition and the stories, as well as welcoming questions about the rakugo art. Join us for this introduction to rakugo and a singular performance from Sunshine as he works to share this traditional art with the world.

Katsura Sunshine is a Canadian traditional Japanese rakugo comic storyteller, theatre producer, and television personality. In 2008, he became the 15th apprentice to the great Rakugo Master Katsura Bunshi VI, from whom he received his name. He was the first ever western Rakugo-ka in the Kamigata tradition (Osaka/Kyoto) and only the second in Japanese history, after his predecessor Kairakute Burakku a hundred years before. Prior to his work in rakugo, he began his career in entertainment as a playwright, composer, and producer of musical theatre.